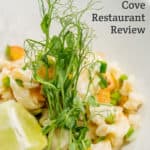 A review of Blue Marlin Cove Restaurant in Grand Bahama and a look at some of the best menu options. Hint: you'll want to get the seared Nassau Grouper after reading this! 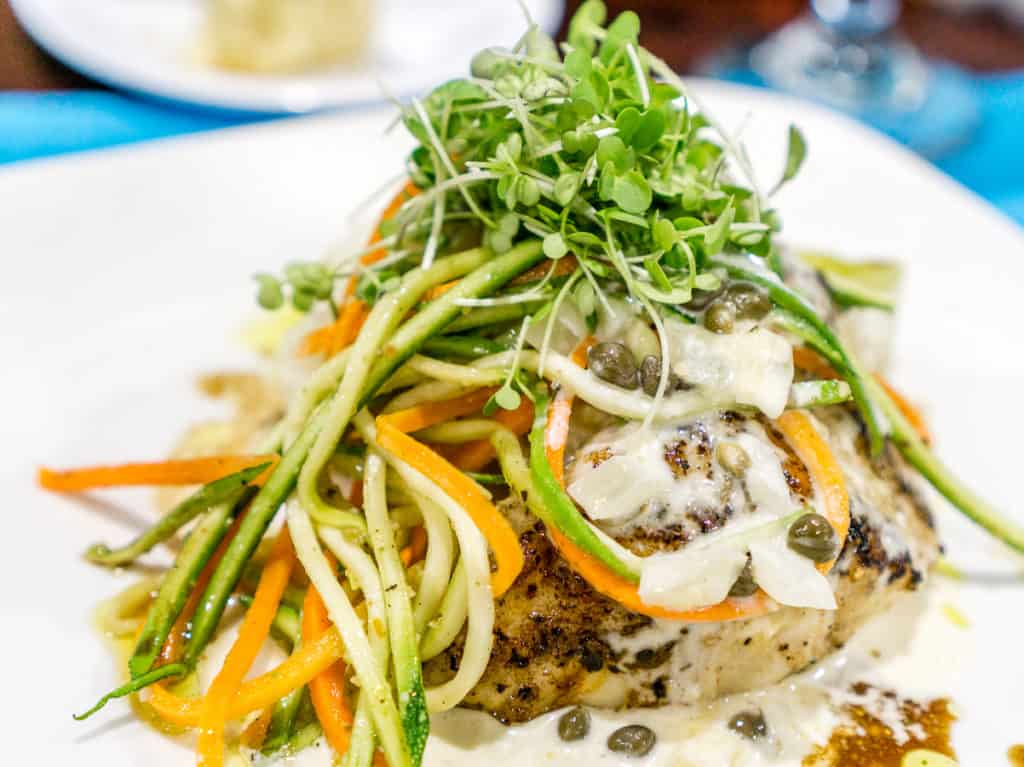 Disclaimer: The delicious food pictured in this post was provided free of charge, compliments of the restaurant and chef in exchange for a review. As always, I keep it 100% real and would never write about a restaurant or product I don't enjoy. See my full disclosure.

The other night I got a chance to attend the soft opening of the Blue Marlin Cove Restaurant as the chef's guest.

Never in my life did I think I would get the chance to say those words! So how did this even happen?? You see, as soon as we moved to Freeport, Bahamas a year ago, I looked on Facebook for local groups I could join. Aside from joining some very helpful mama's groups, I also found the Grand Bahama Wine & Dine Group.

This group is one of the most active Facebook groups that I am a part of. People are always posting about their favorite restaurants and recipes, and posting pictures of their food. It's a great way to know what's happening food-wise on the island. And since the island is fairly small, it is always an exciting occasion when a new restaurant opens up.

So when Chef Patrick Pierre was having a soft opening of his new restaurant, Blue Marlin Cove, he reached out to the admin of the GB Wine & Dine group to find a few enthusiastic foodies to attend as the chef's guests. I felt so lucky that I got to attend such a fabulous event and meet a few fellow foodies... and I also got a night off from mama duties!

We arrived to Blue Marlin Cove a little after 7 PM and the place was packed! Music was playing, the waitstaff was moving around taking orders, and the food they were bringing out looked good. It was a festive atmosphere and you could tell everyone was excited to be there.

There was also a full bar on the side of the dining area. 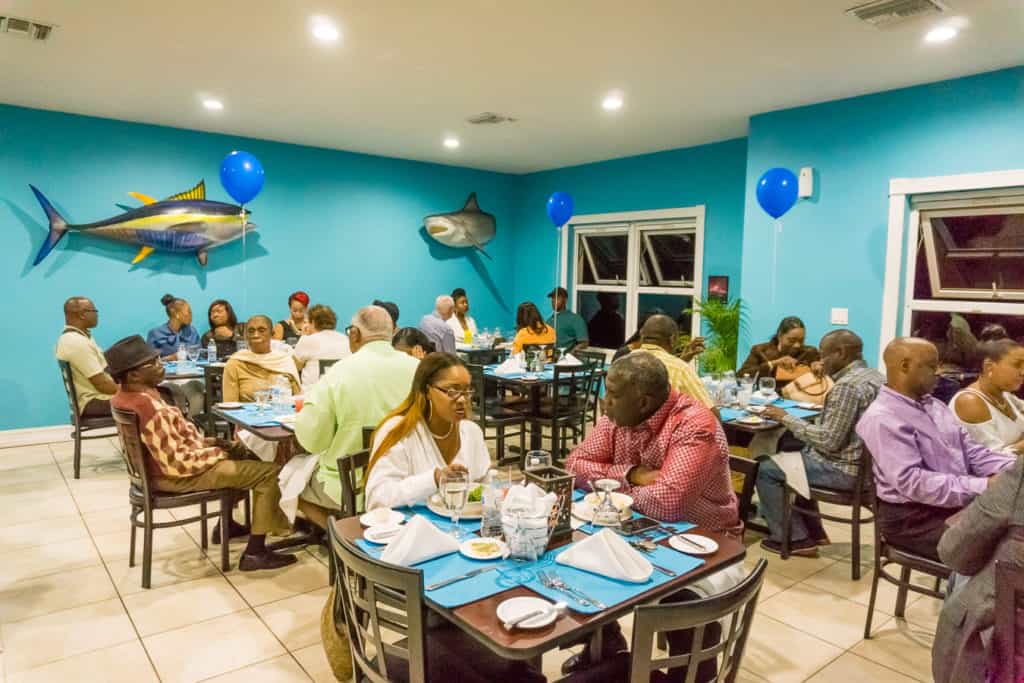 The menus were already on the table when we were seated, which is great because we were all really curious about what we were eating that night! 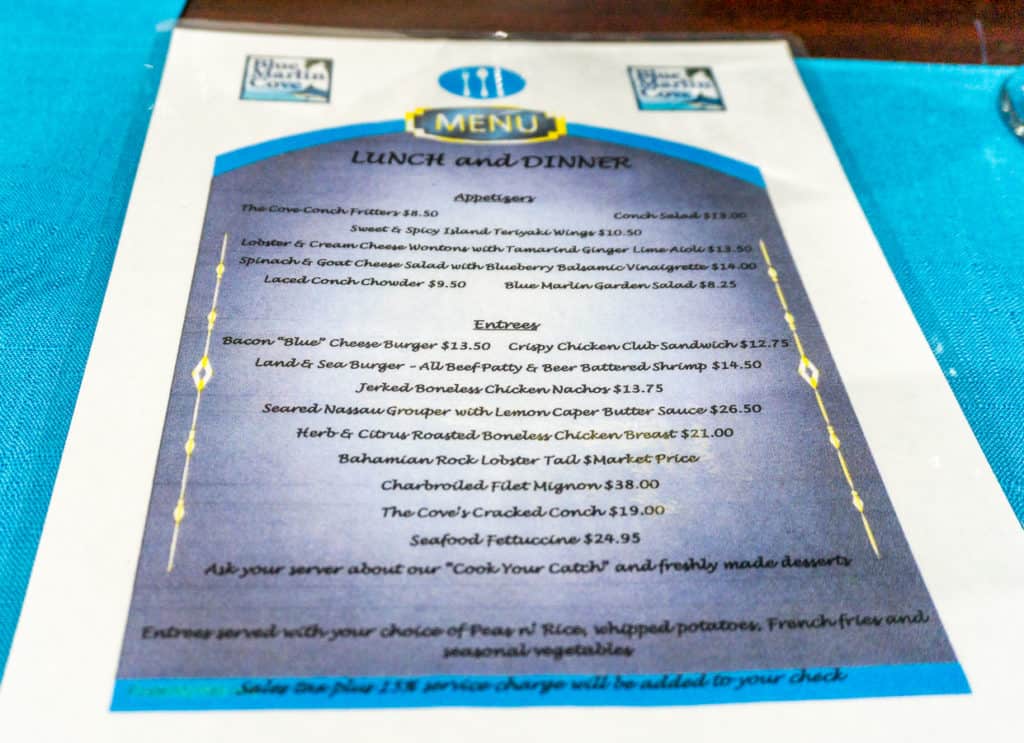 The Blue Marlin Cove menu had a good mix of options, including traditional Bahamian dishes.

We ordered our appetizers shortly after sitting down. I ordered the Lobster & Cream Cheese Wontons with Tamarind Ginger Lime Aioli, as did most of our table. The little crispy wontons were delicious! They had generous chunks of lobster and just the right amount of cream cheese inside. The dipping sauce was the perfect accompaniment to the wontons, and I love how the chef incorporated the tamarind-ginger-lime tropical flavors. 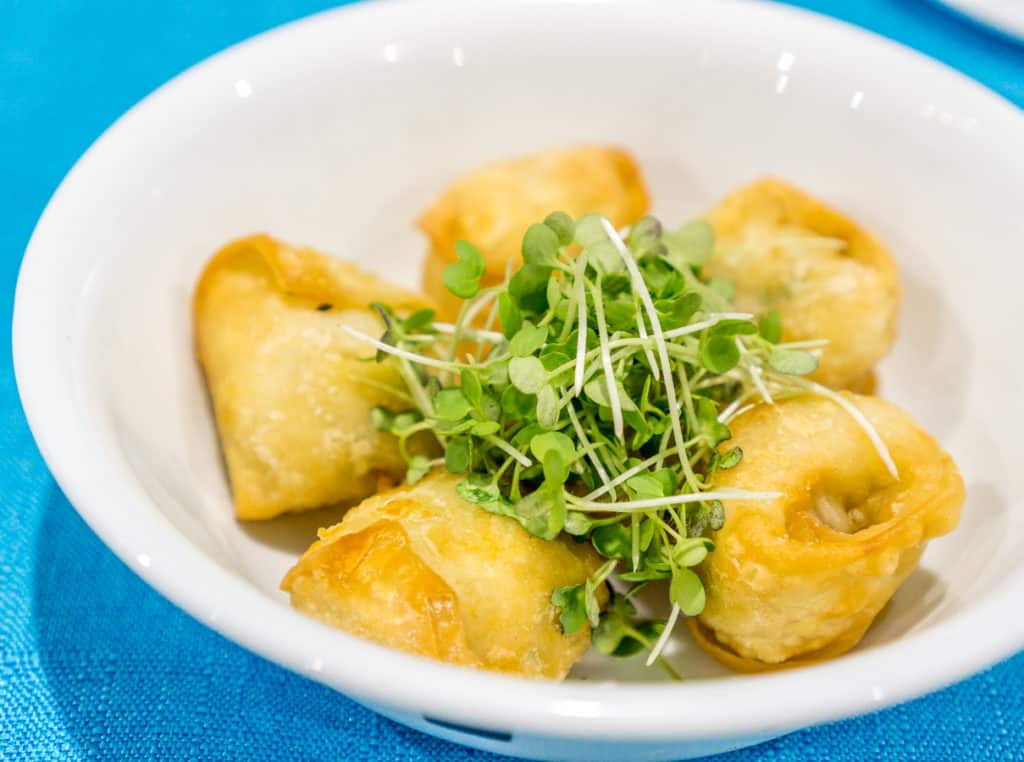 A couple of people at our table ordered the Spinach and Goat Cheese Salad with Blueberry Balsamic Vinaigrette, and they could not stop raving about the salad! The goat cheese and blueberries were perfect. The dressing was balanced and not too tart, and the greens were super fresh. 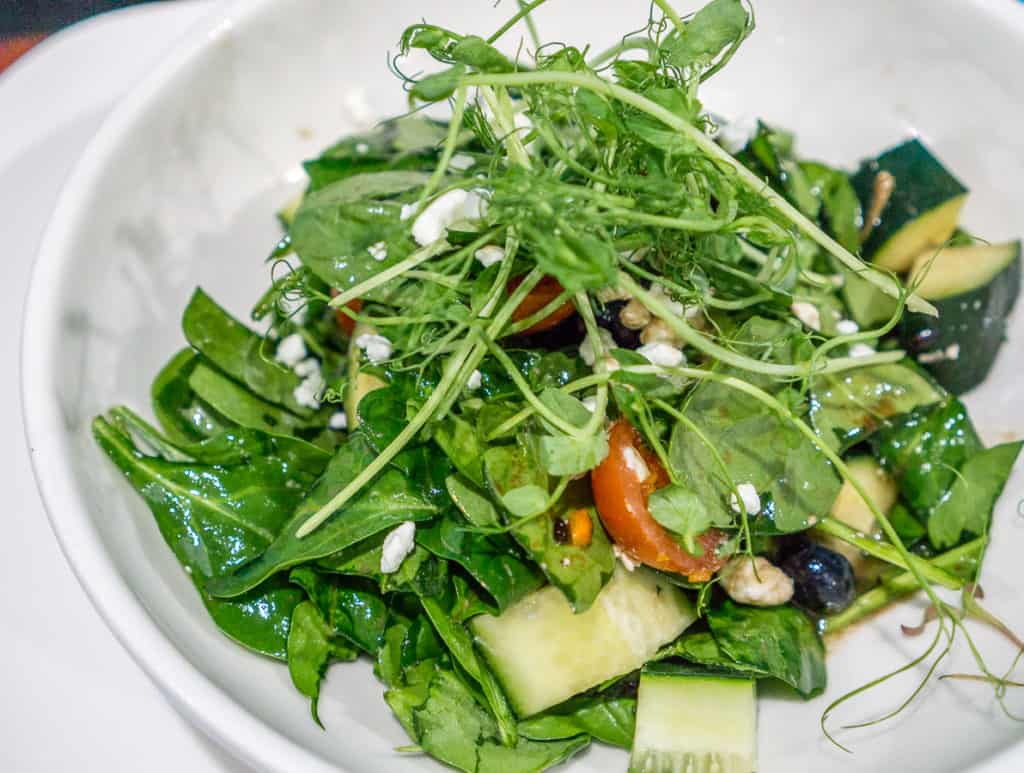 One lady at our table ordered the conch salad - someone always has to get the traditional dish, otherwise how do you really judge a restaurant?? The presentation was lovely, the pieces of conch were generous, and the flavor was delicious. 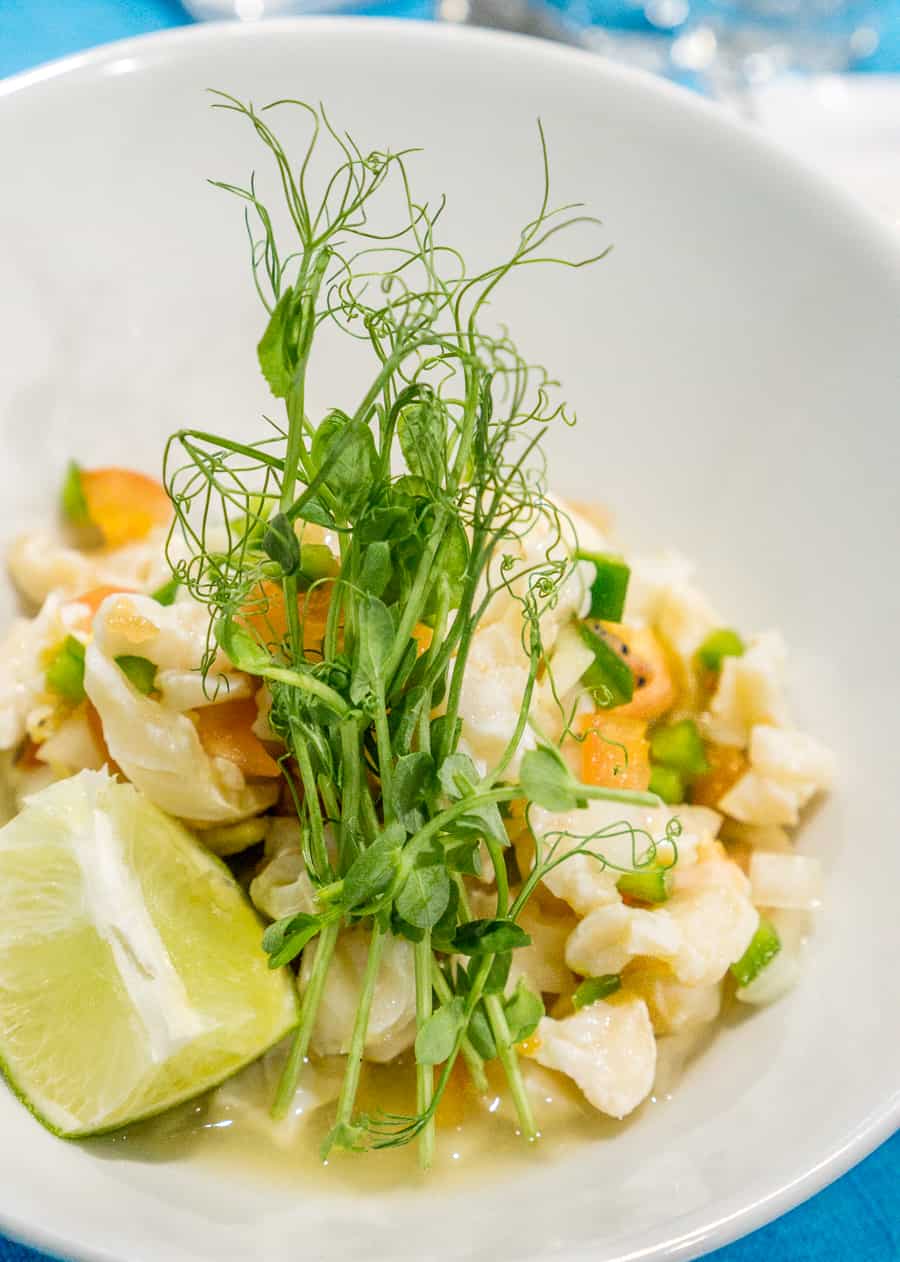 Most of our table ordered the Seared Nassau Grouper with Lemon Caper Butter Sauce. The funny thing is we all got it with the whipped mashed potatoes, even though we had a choice of several different sides. It's not a surprise we all got to attend this soft opening - we all clearly have great taste in food! 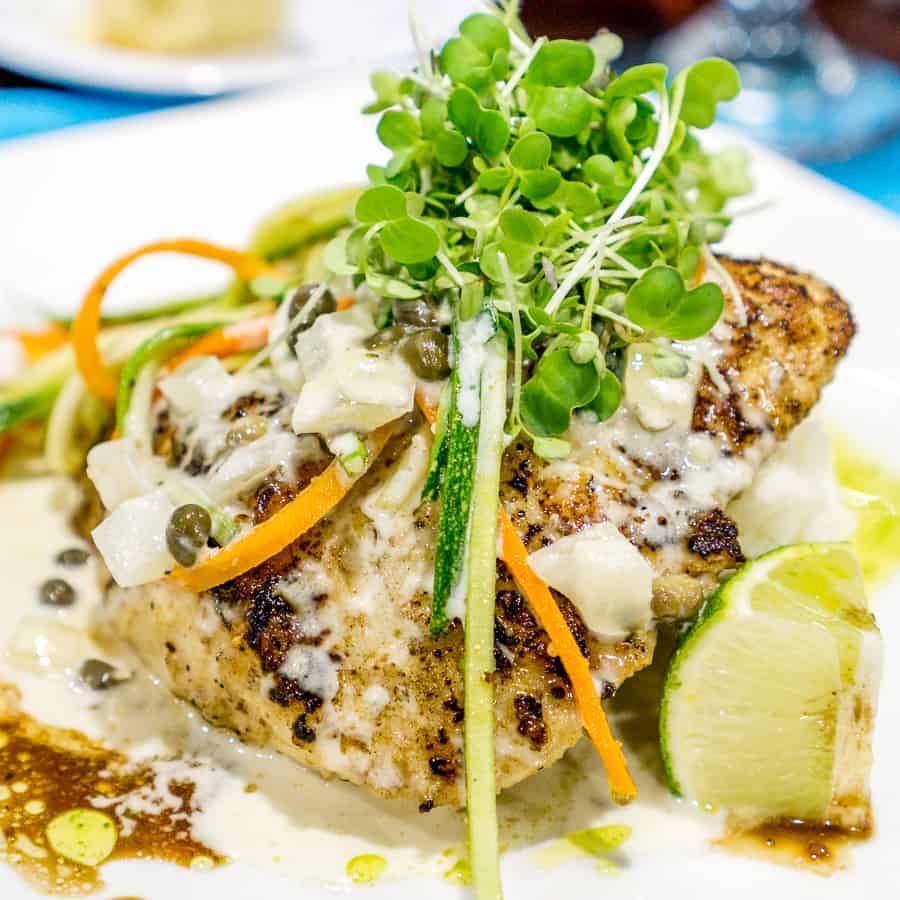 Everything was topped with gorgeous spiralized vegetables and microgreens, which made the dish absolutely stunning. We all ate our whole portions. And then I came home and made a promise to go for a run the next morning (I kept my promise, in case ya'll are wondering!).

Our group ordered a couple more entrees: the Land and Sea Burger and the Seafood Pasta. The presentation of the burger was nice: it sat on a beautiful wooden board piled high with beer-battered shrimp. The shrimp batter was a true beer-batter (probably made with a local Sands or Kalik!), and you could taste the thyme and garlic flavors of the seasoning in the batter. The shrimp were huge and juicy. The burger patty itself could have been a little more substantial, but overall it was a filling meal.

Pro tip: if you order the burger, ask for a bit of the tamarind-ginger-lime aioli from the wonton appetizer - it would make an amazing shrimp dip and burger condiment as well! 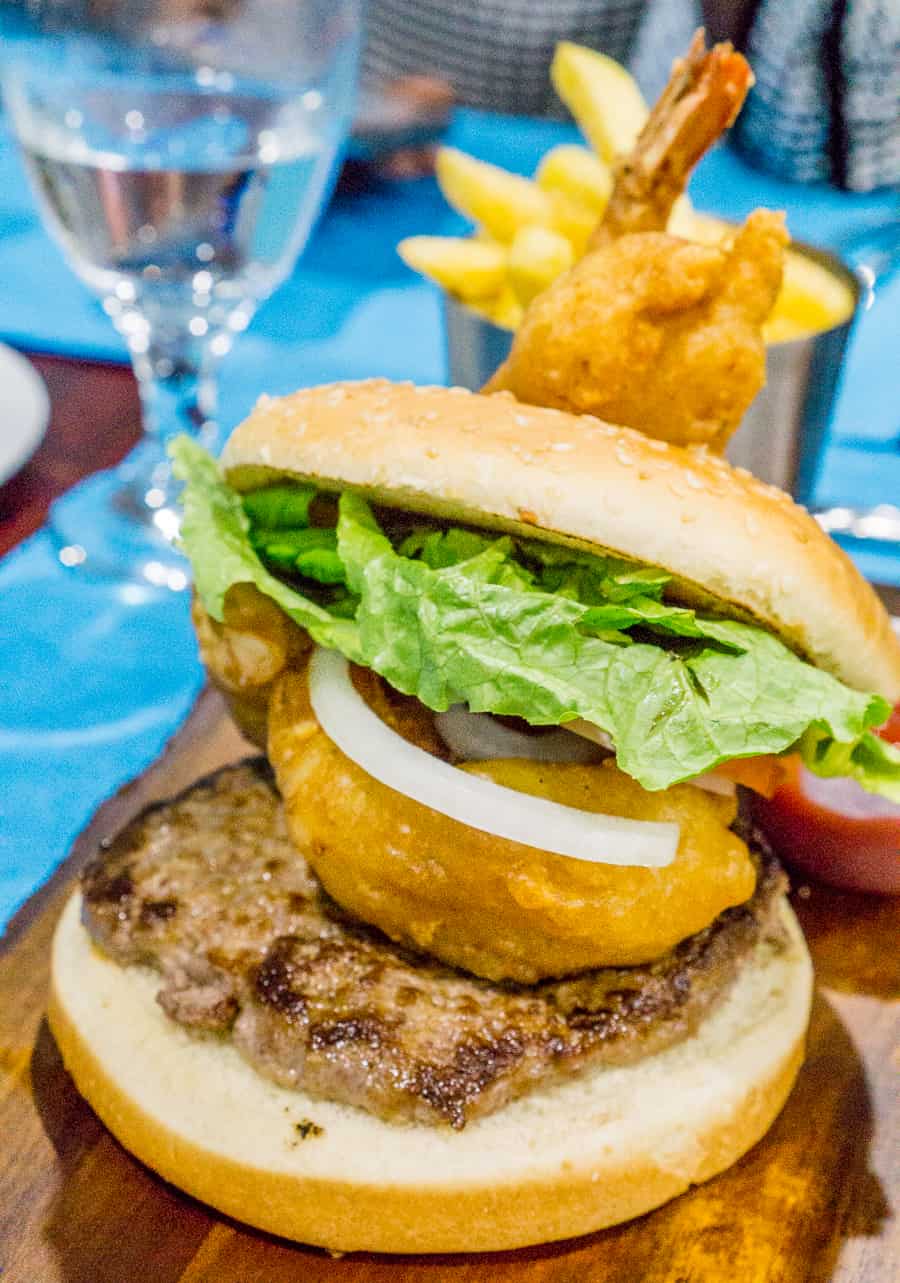 We had a really good dinner at Blue Marlin Cove. It will definitely go on my "must-eat-here" list when we go out to the West End. I am really glad more restaurants are opening up on the island.

If you're looking for a nice dinner out in Grand Bahama, keep this restaurant in mind. And tell Chef Patrick that the Grand Bahama Wine and Dine Club sent you. 🙂 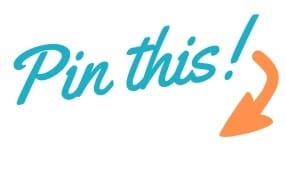 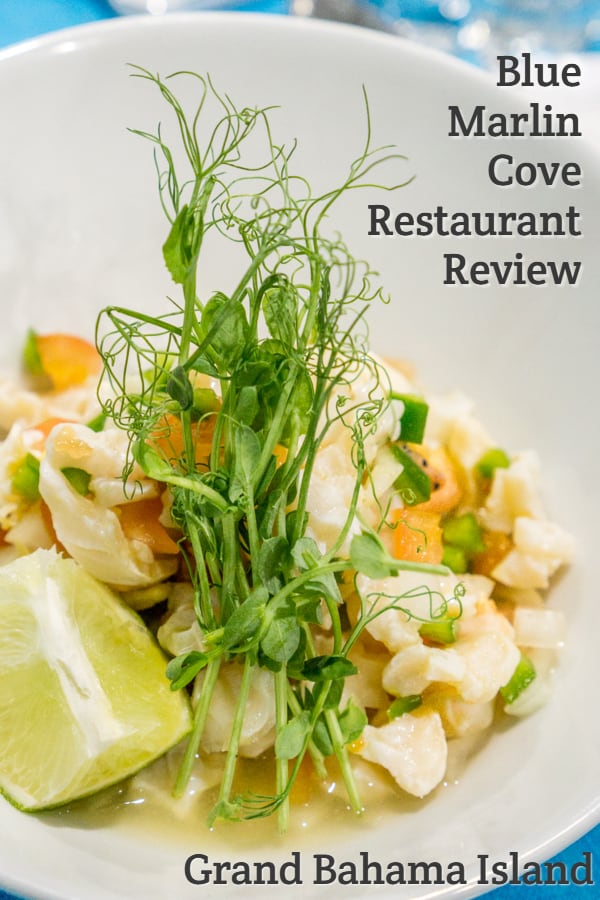