This post may contain affiliate links. As an Amazon Associate I earn from qualifying purchases. See my disclosure. 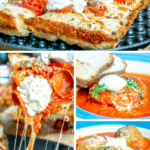 We had the best Detroit-style pizza at Blue Pan Pizza in Denver. Read on to see the other amazing menu options as well as the fun make-your-own pizza from the kid's menu!

I am very excited to partner with Blue Pan Pizza for this restaurant review. All opinions are my own, as always. 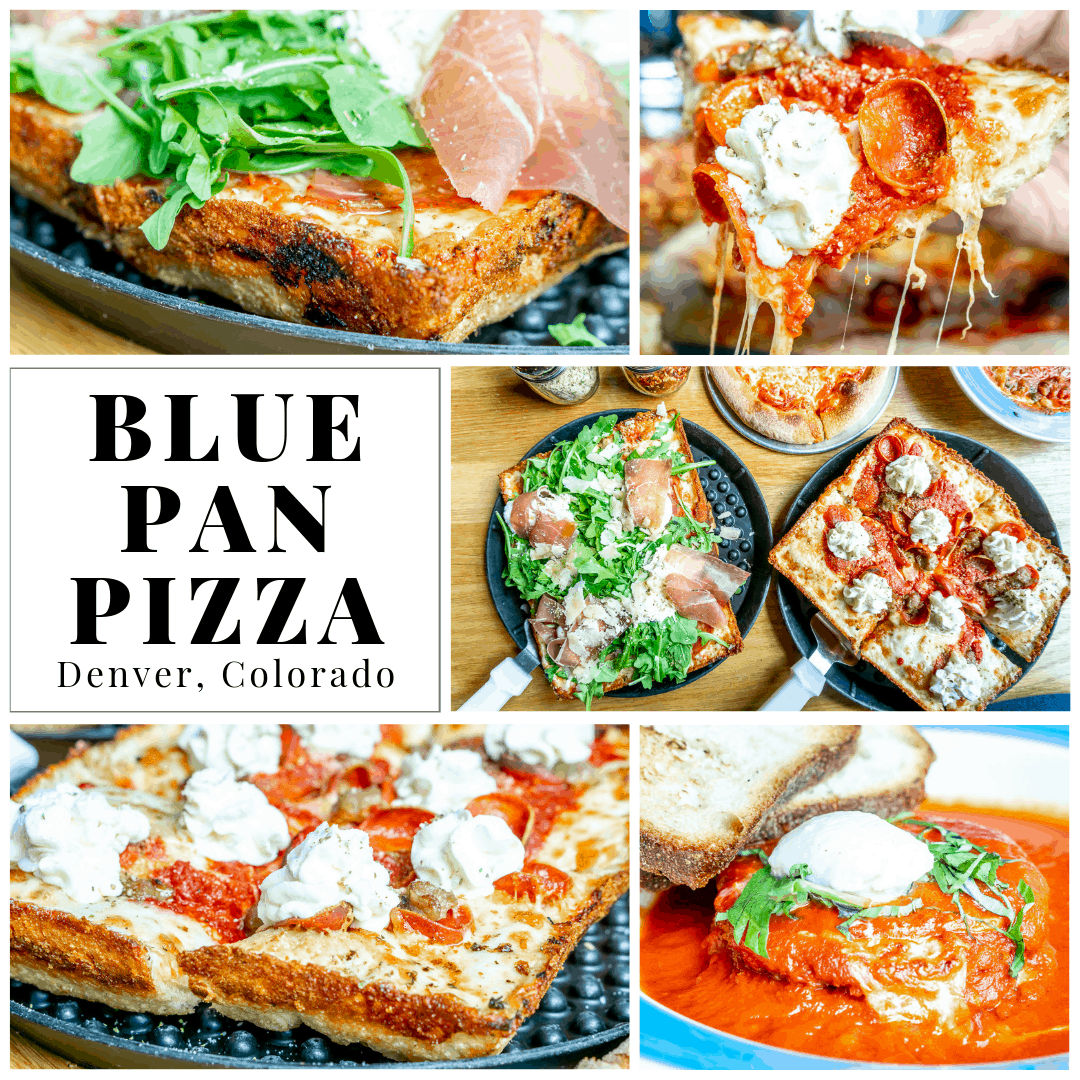 We live on a small island with not too much variety in restaurants, so when we travel we take eating out very seriously. I plan ahead to find the best restaurants and we make a plan on how to tackle them all.

Since we have a 2 year old boy who is super active and a super picky eater, we are always looking for kid-friendly restaurants when we go out to eat. We heard about Detroit-style pizza recently, with its amazing crispy crust that can hold lots of toppings, so I knew I wanted to try that on our next trip out west.

I did some research and found Blue Pan Pizza to be the go-to spot in Denver for Detroit-style pizza. It also has a great kids menu and the rest of the food looked amazing as well.

Blue Pan Pizza in Denver was super welcoming and generous, they provided us with a delicious meal for our whole family.

Blue Pan has two locations in Denver. The Congress Park location was in exactly the right spot for us - near our AirBNB, the zoo, and the botanical garden. There was plenty of street parking in the area, so getting there was super easy. 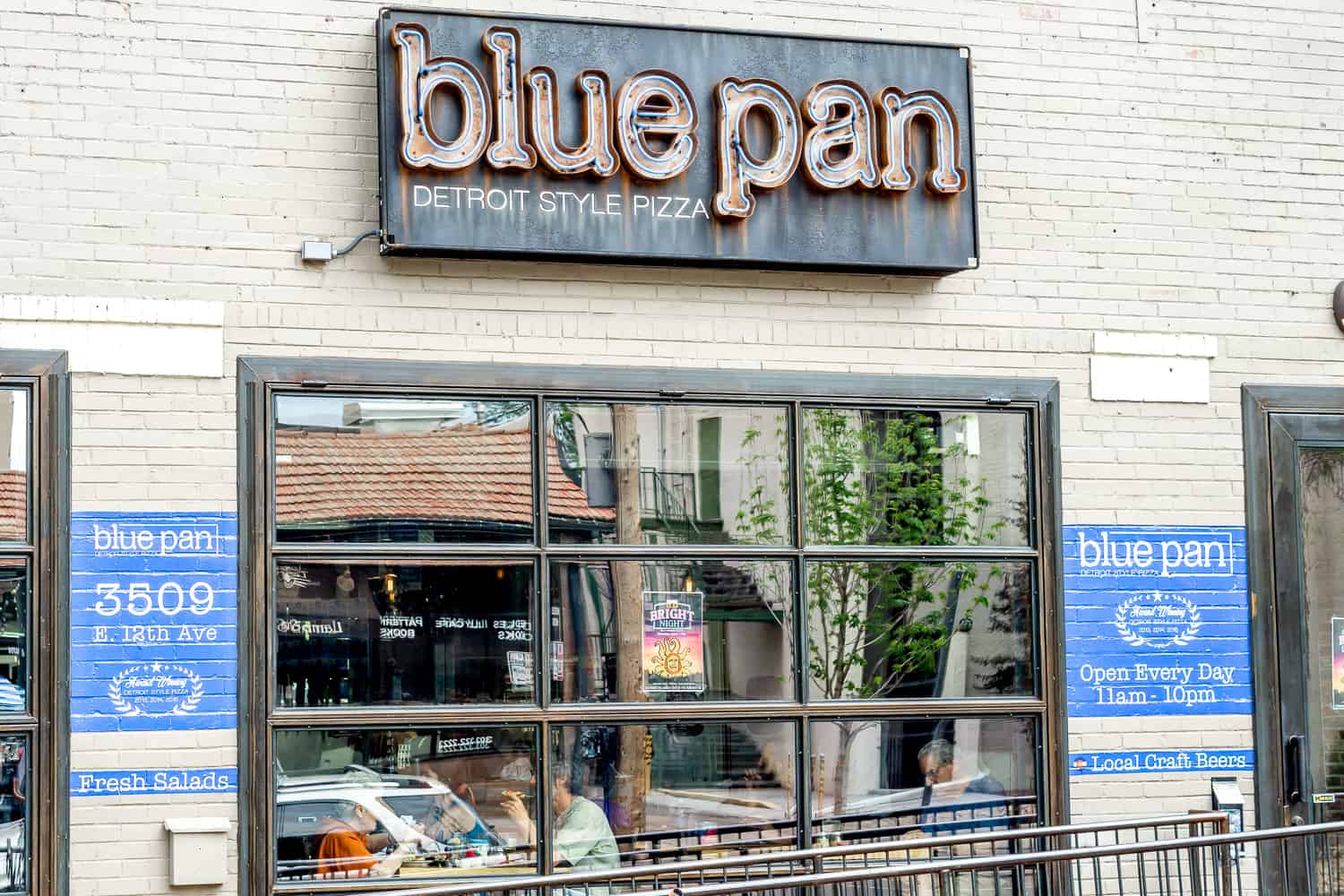 We immediately loved the modern laid back atmosphere when we walked in. There was music playing and enough people in the restaurant so we wouldn't be the center of attention if our son started acting like the two year old that he is. There was funky art and a nice vibe. 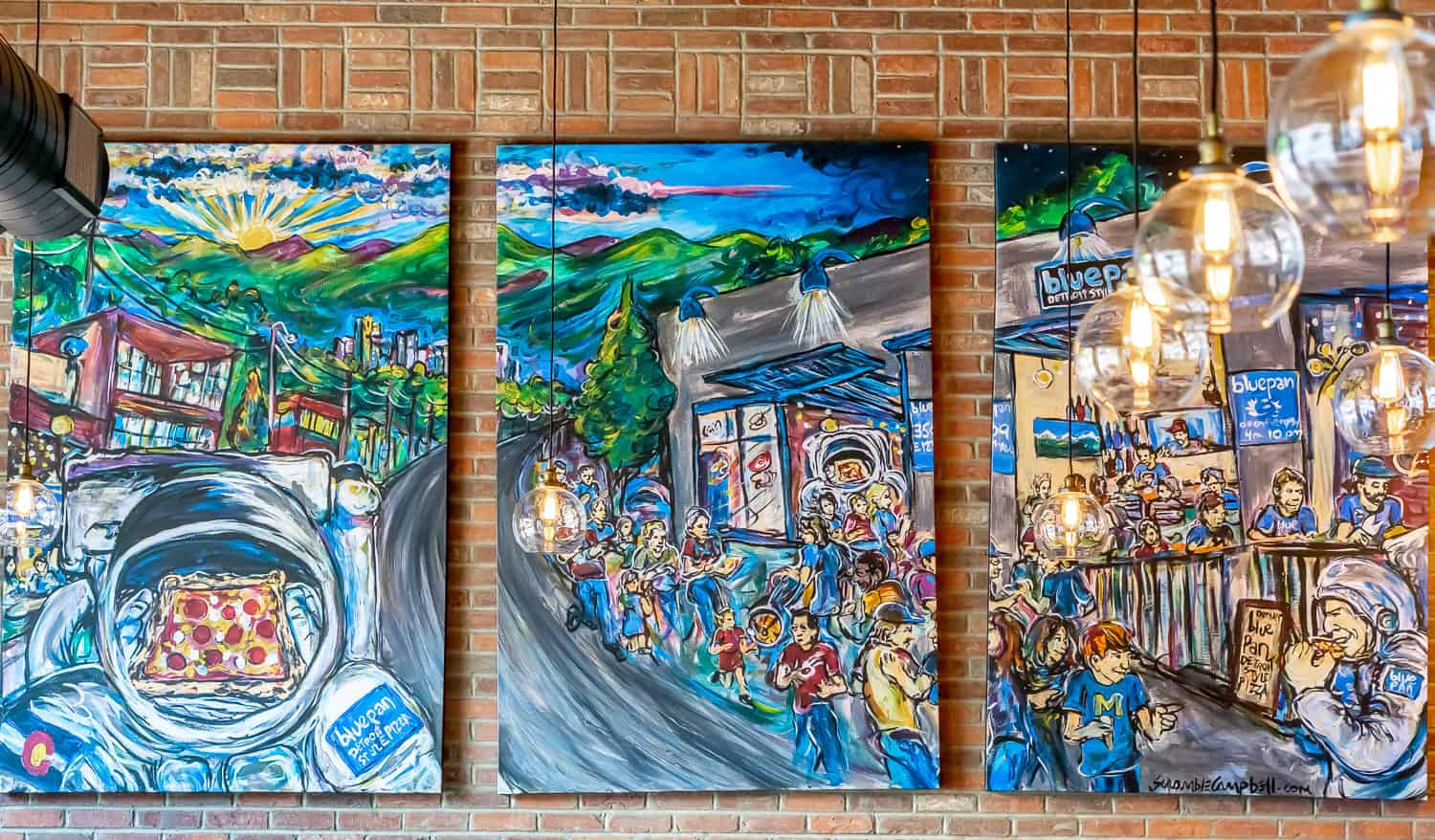 I always look around to see what other people are eating to get an idea of what to order. The table next to us all had amazing looking gigantic salads. The table behind us had a variety of appetizers and pizzas. There were a lot of great sounding things on the menu, as well as many gluten free options.

We knew we wanted to try the Detroit-style pizza, which is what Blue Pan is known for, so we decided to go for that. But before finalizing our pizza choices, we had to try some appetizers. We ordered the Arancini Risotto Balls and the Eggplant Parmesan. Both were absolutely delicious, served with lots of marinara sauce for dipping. 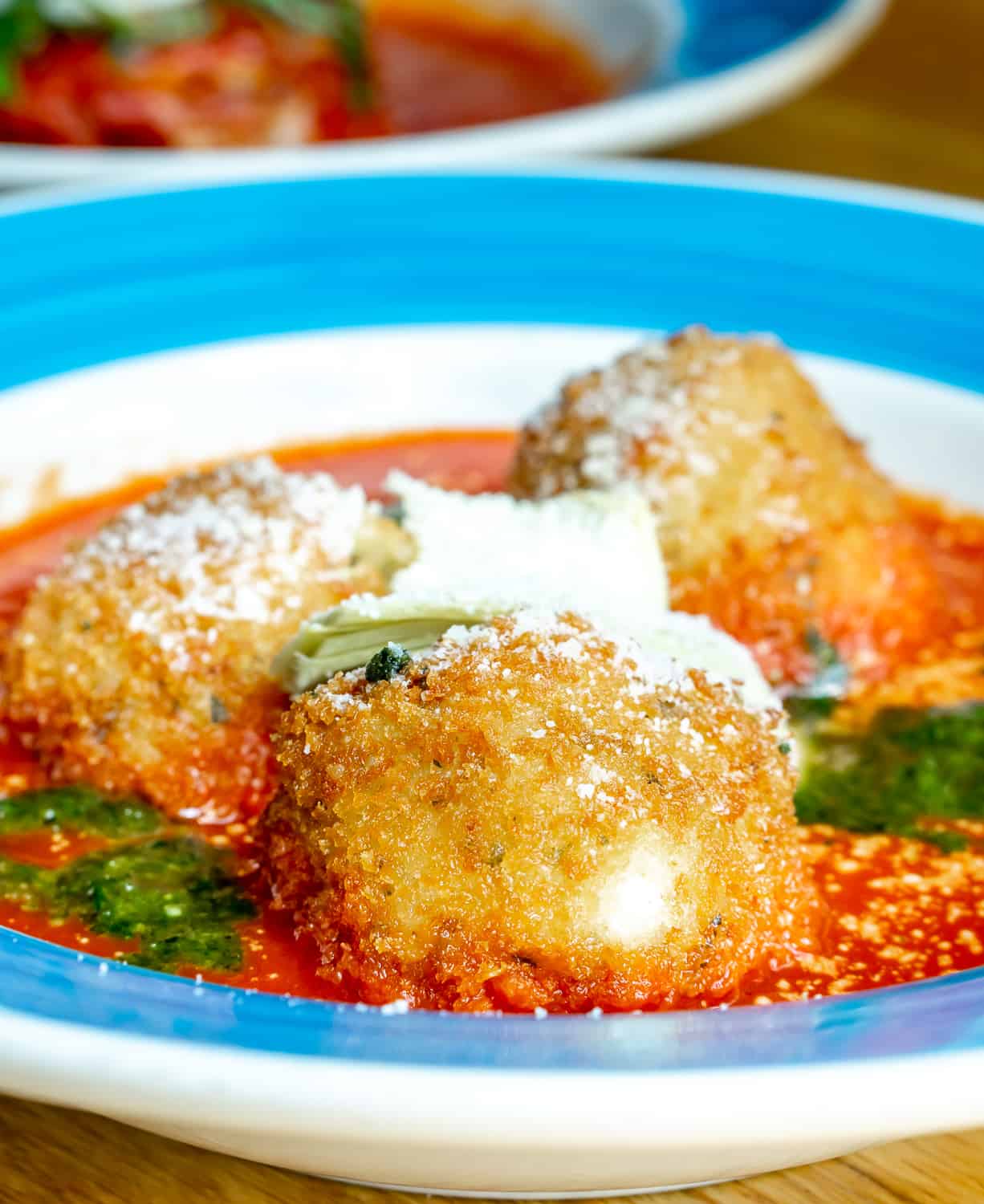 The arancini rice balls were perfectly crispy on the outside and cheesy on the inside. They practically melted in my mouth. They were sitting in a generous bowl of delicious marinara sauce with artichoke and a swirl of fresh pesto.

The Eggplant Parmesan dish was also very good, the eggplant was nice and tender and so flavorful. This came with crusty garlic bread for dipping. 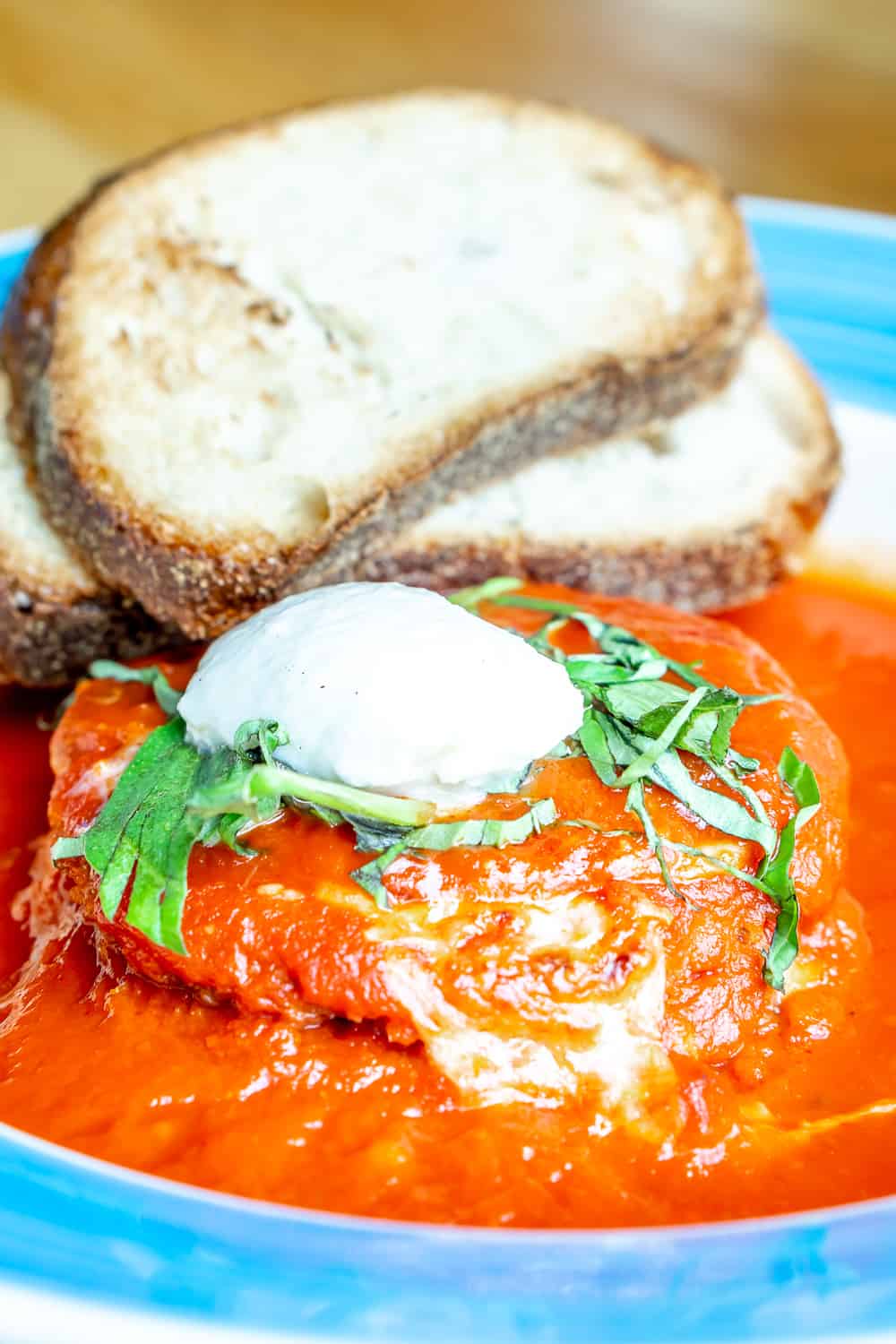 Pro tip: leave some of the marinara sauce from the appetizers and use that as a dip for the crispy pizza crust.

Then the main course was brought out: the Detroit-style pizza. We ordered the Brooklyn Bridge and the Parma Italia.

OMG this was amazing! (Or as my husband said, "pizzamazing!")

The Brooklyn Bridge Pizza was topped with pepperoni, sausage, amazingly creamy ricotta, chopped garlic and oregano in addition to the pizza sauce, Pecorino Romano, mozzarella and brick cheeses. Needless to say it had a TON of flavor. 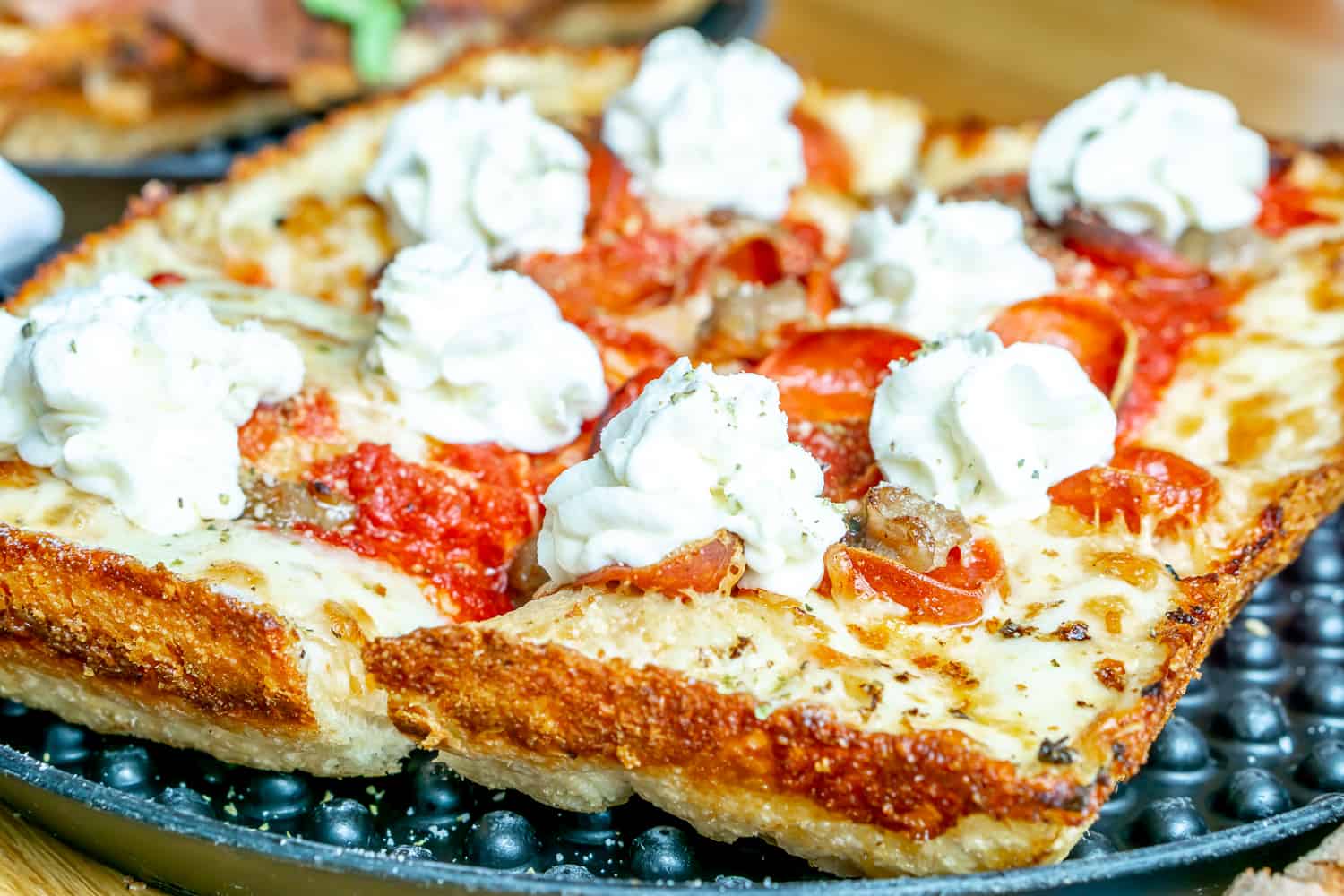 The creamy ricotta went so well with the spicy pepperoni and sausage. It was glorious. And look at that cheese pull! 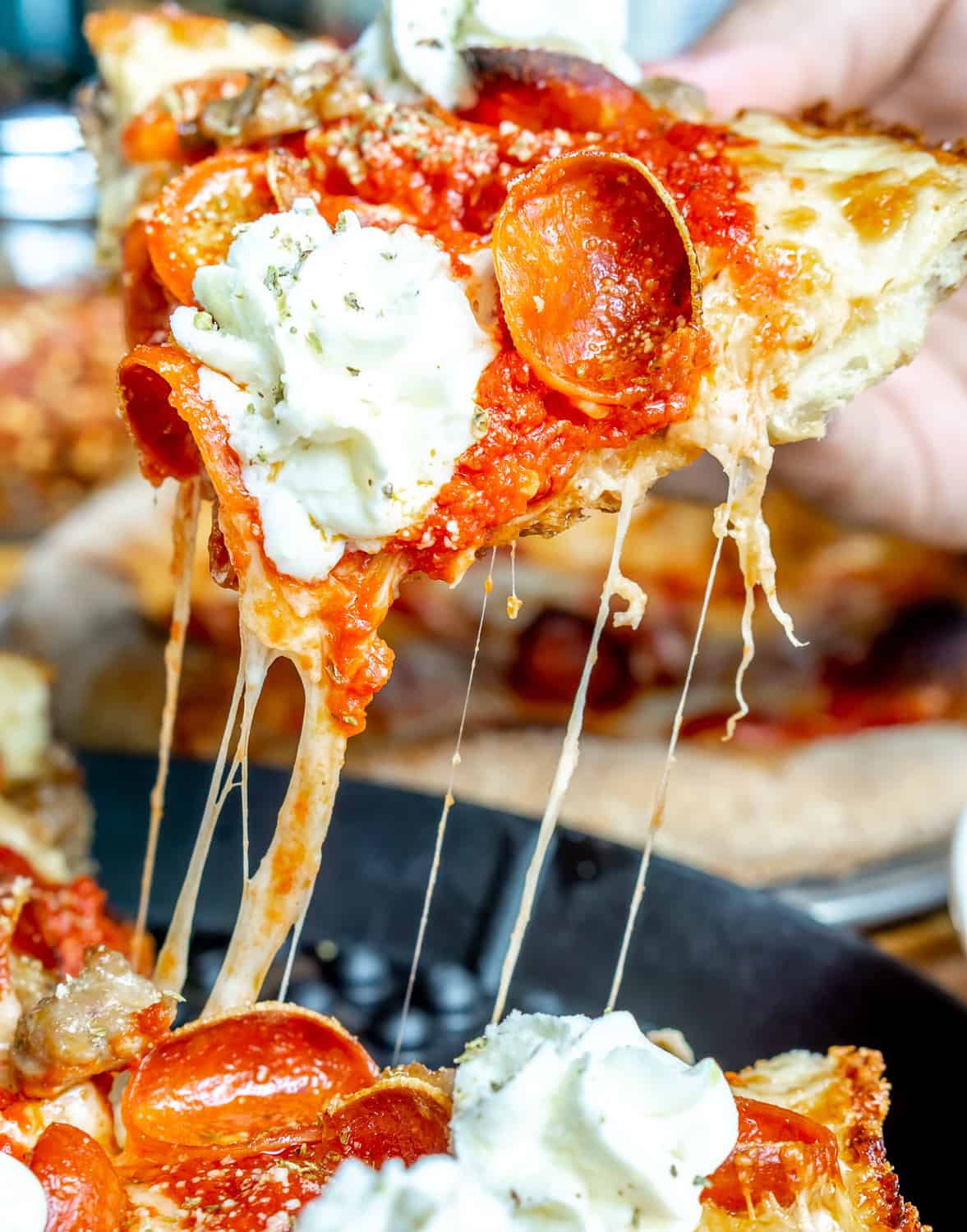 The Parma Italia was overflowing with prosciutto, Sopressata, the creamiest Burrata, tomato sauce, fresh arugula, and generous shavings of Parmigiano Reggiano cheese. That Burrata alone was absolutely amazing, I've NEVER seen a pizza with Burrata on it. Each slice had a generous portion of Burrata and I was in love. Cheese has always been the way to my heart. 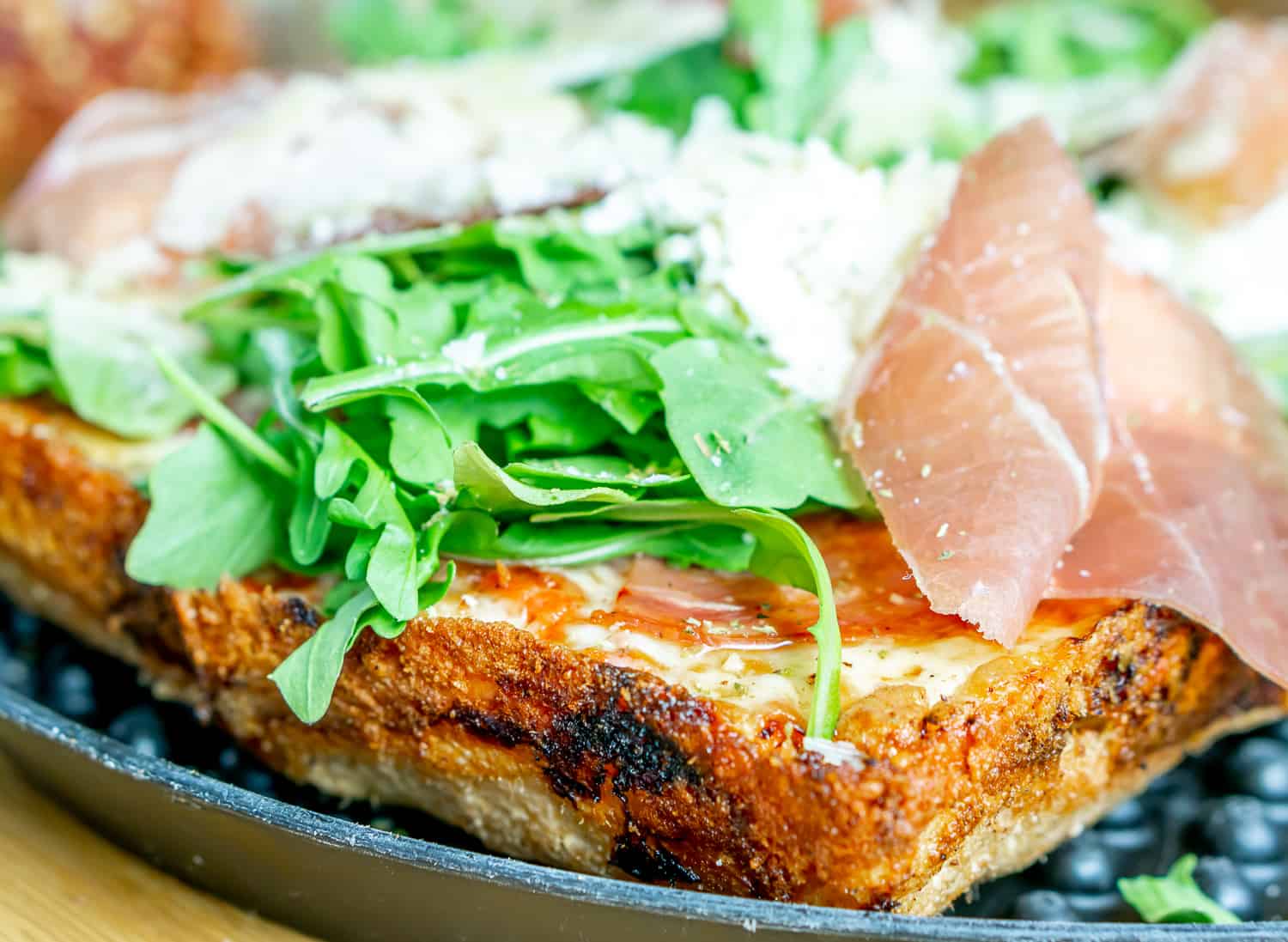 The Detroit-style pizza dough rises for 72 hours so it's light and not as heavy feeling as a Chicago pizza. The dough is par-baked (which is a fancy way of saying pre-baked), which is what gives it that crispy caramelized crust that Blue Pan is famous for. When the toppings are added to the dough and baked, the cheese melts onto the crispy crust and forms a cheesy, crispy edge all around the pizza. It's good stuff.

We also ordered a Build-Your-Own-Pizza for my son from the kid's menu. The server brought us the hand tossed pizza dough, sauce, cheese, and pepperoni slices, and my son got to put together his own pizza! He loved this and got a little too excited about dumping all the ingredients on top of the pizza and throwing the pepperoni around. 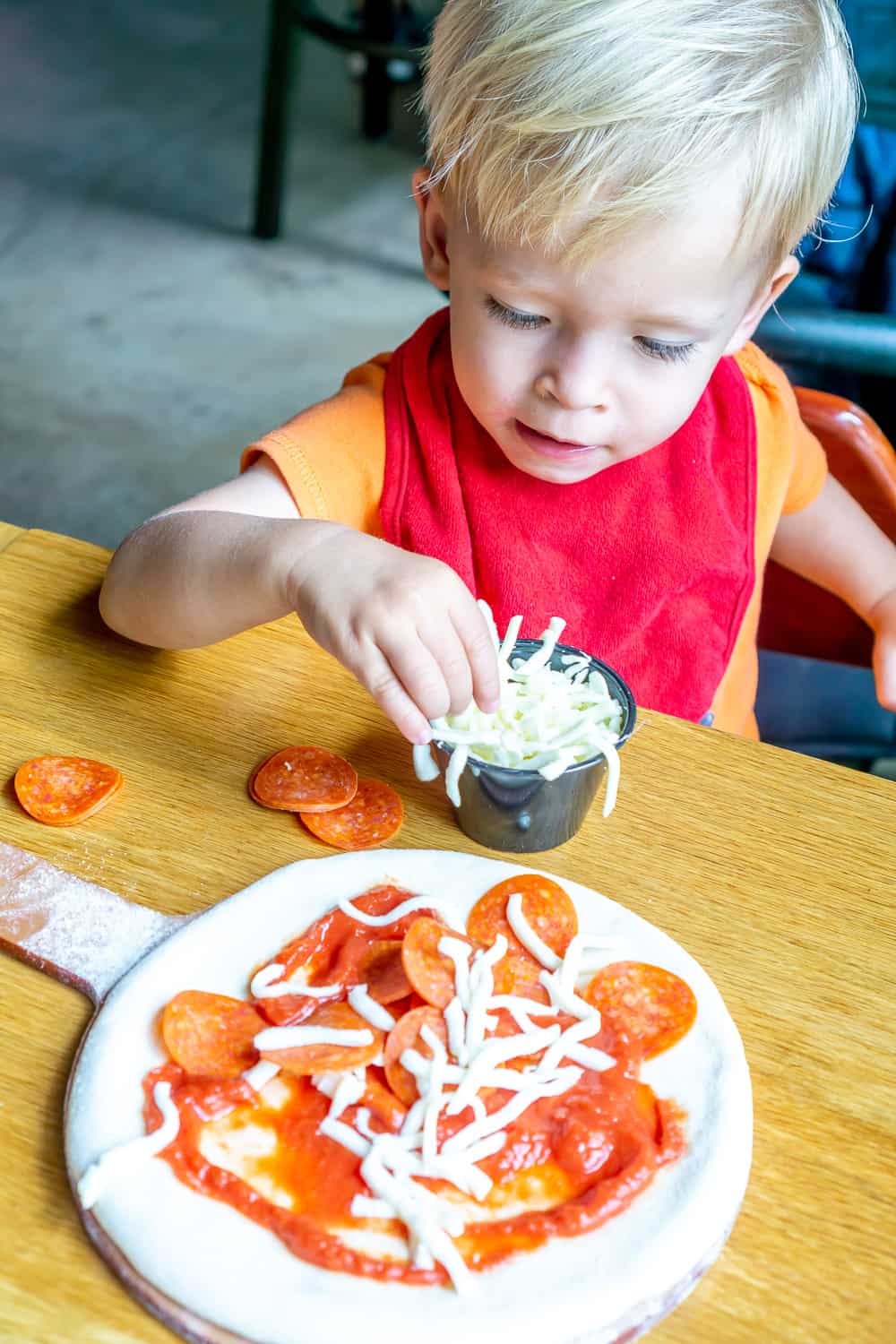 I am pretty sure that the chef in the back fixed up my son's pizza before baking it, because it came out looking pretty good (aka not looking like a two year old put it together!). The kids pizza was pretty good. My son had a bite at the restaurant and then ate a bit more of it when we reheated the leftovers. That's about as good as it gets with a picky toddler. 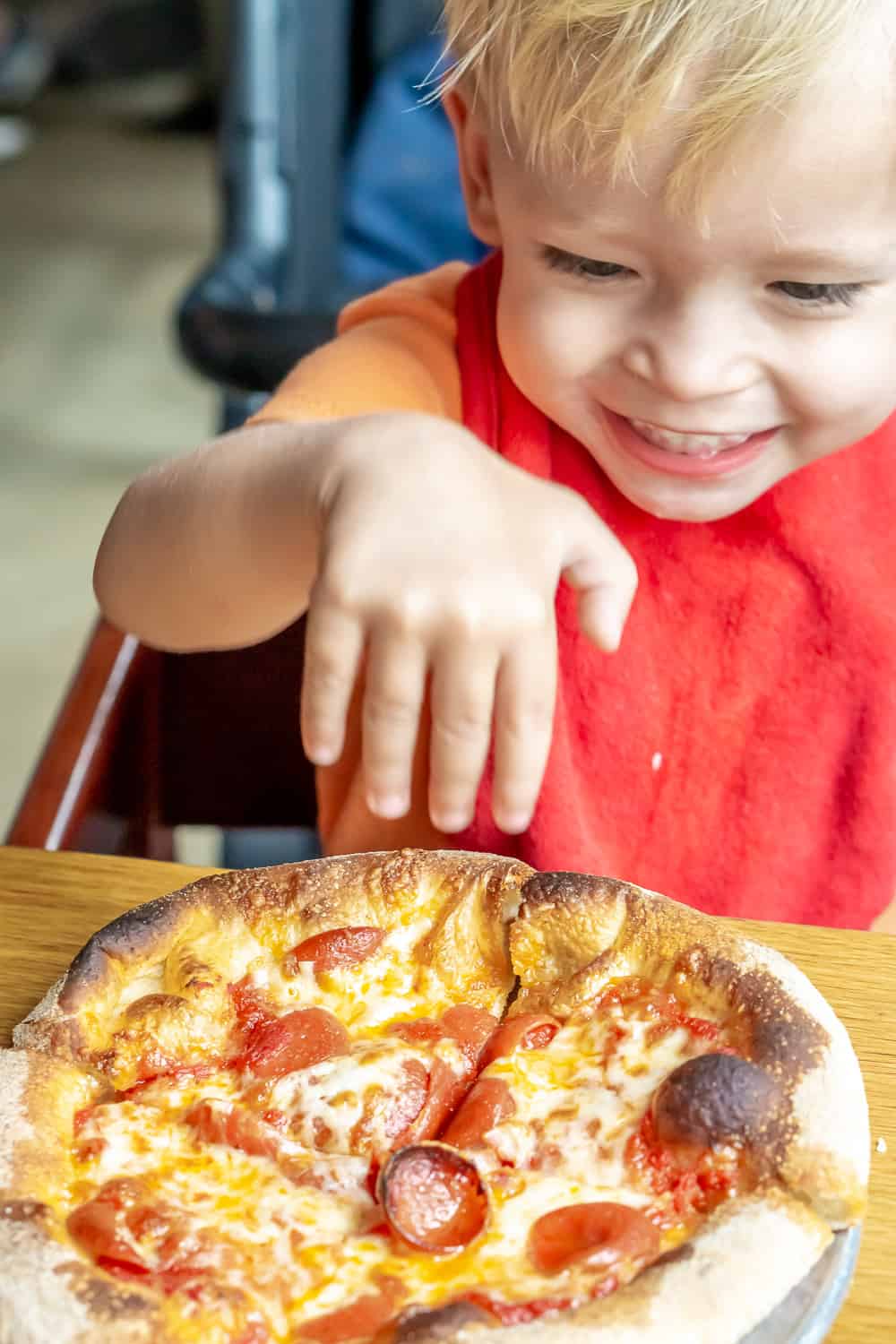 Along with our food we had a Blueberry Wheat Ale and tried a couple of Detroit sodas. We've never even heard of these Detroit sodas, but it turns out people often come in just to pick up a 6-pack of the Vernors Ginger Ale. 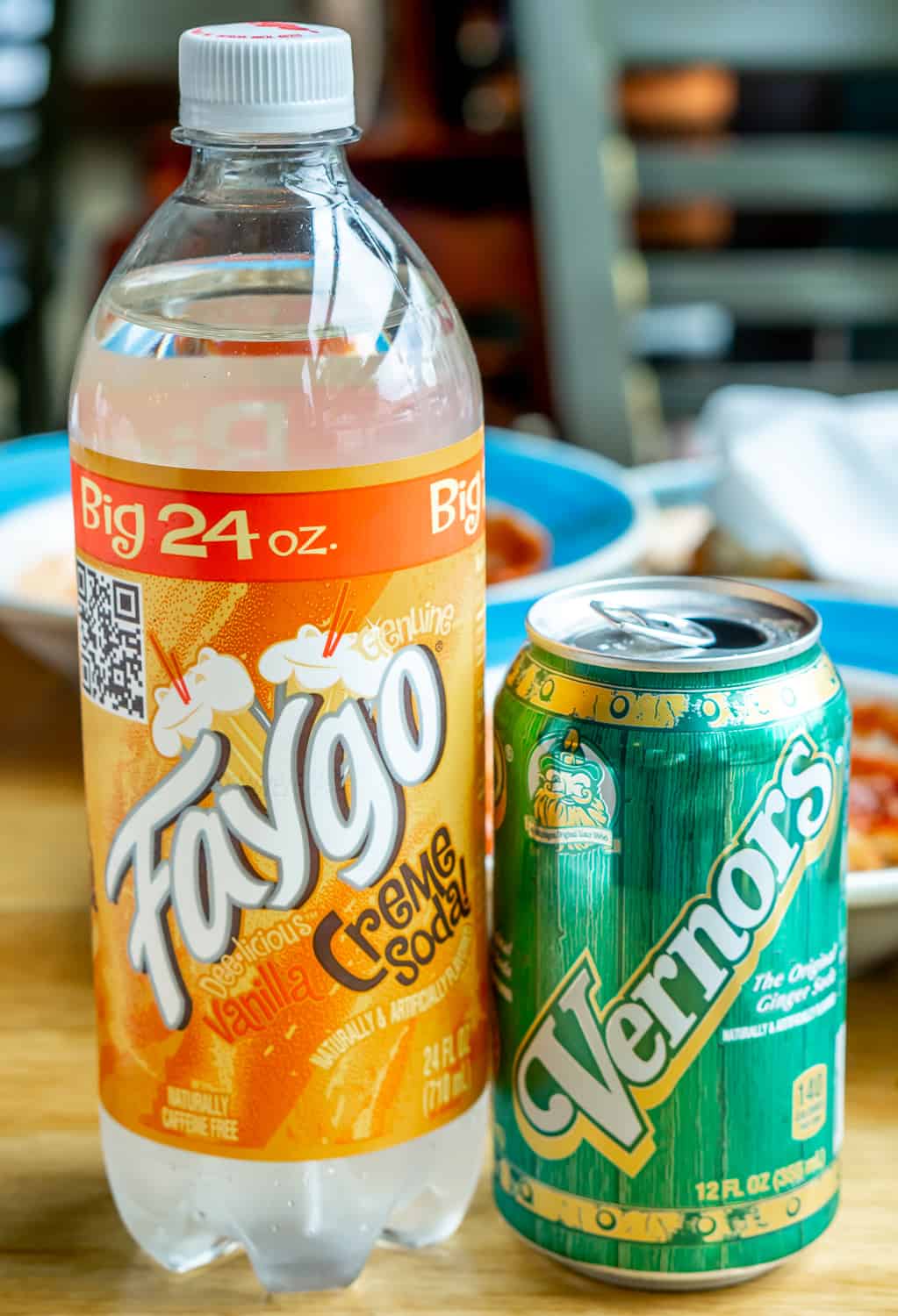 Blue Pan has a full bar with 20 beers on tap that they rotate regularly, so there was plenty to choose from. 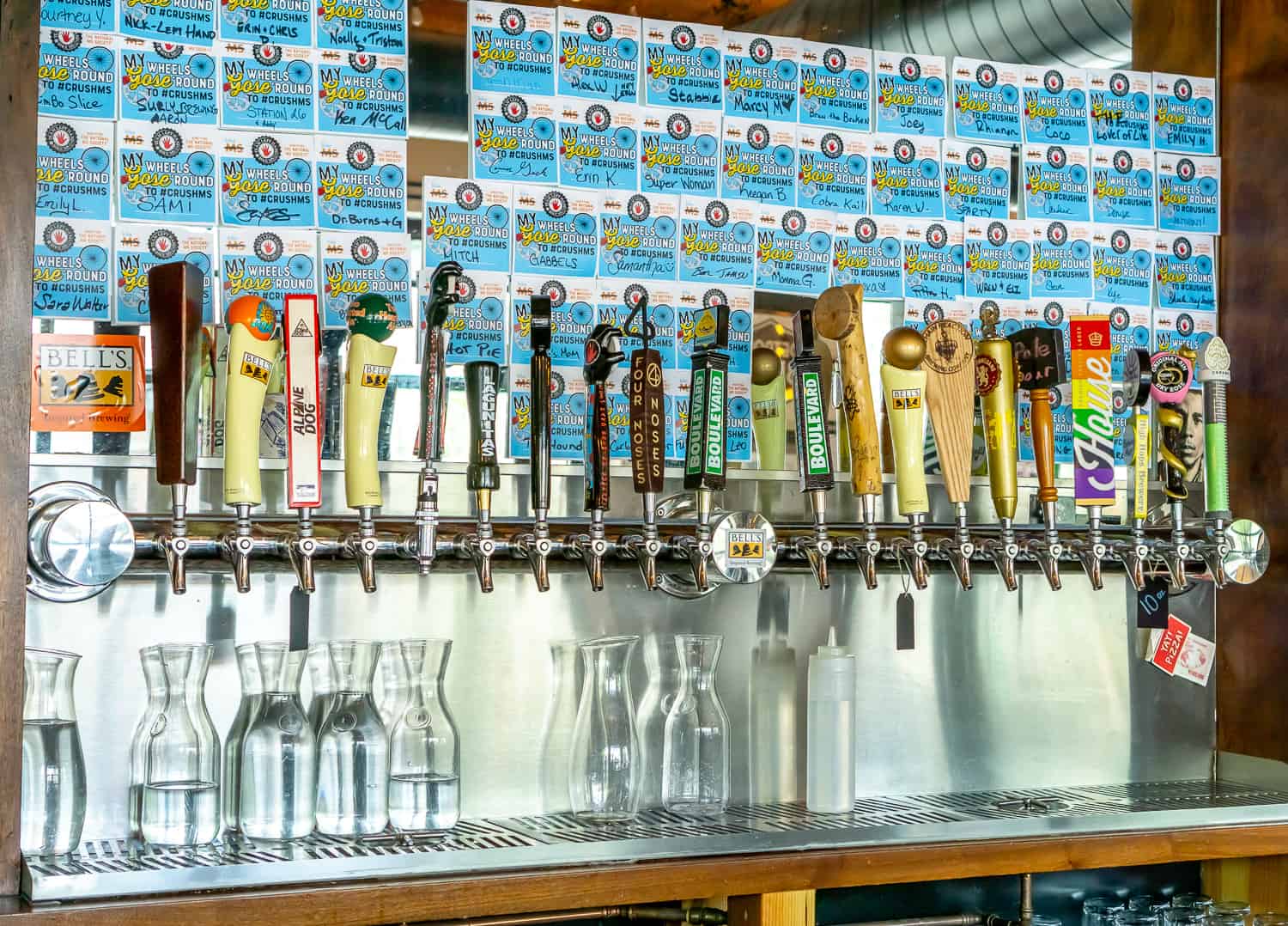 The two appetizers and two Detroit-style pizzas were way too much food for two people (I mean, look at it all!), so we ended up taking half the pizza back to our AirBNB with us. It reheated REALLY well in the oven the next day. So if you're at Blue Pan and can't decide which pizza to get, get them all! You can always eat the leftovers later. 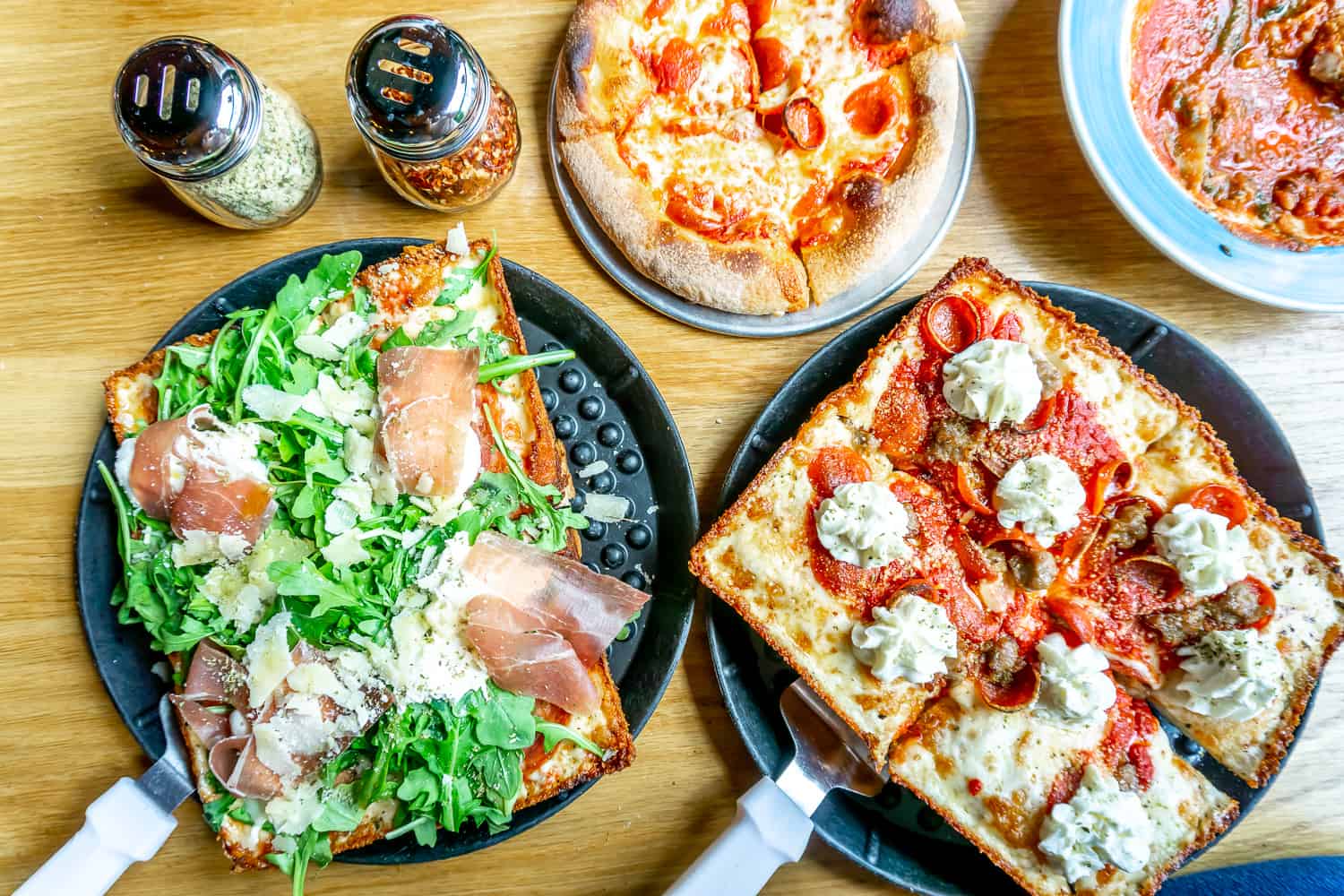 We had a delicious time at Blue Pan and will definitely be making a stop there next time we are in Denver! 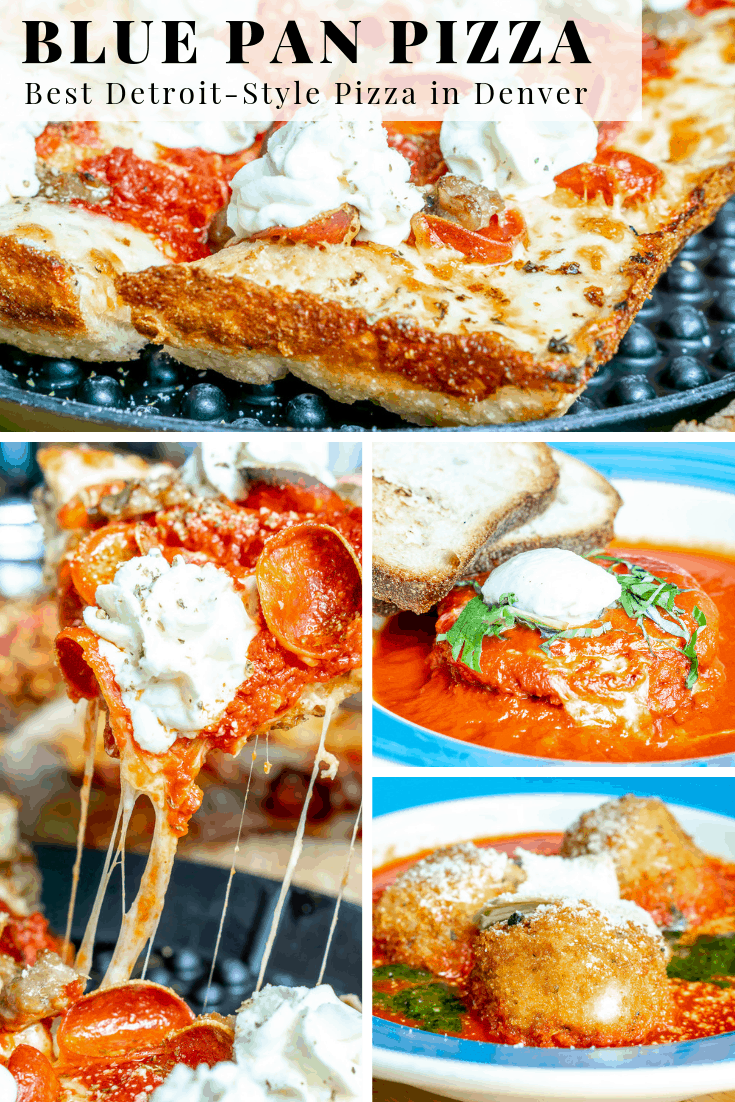 Hi, so glad that you have enjoyed your Detroit style pizza. I’m from Detroit and when you or if you ever get a chance to visit Detroit, Buddy’s Pizza...the original Detroit Style Pizza, is a must for you to sample. P.S We don’t have sodas in Detroit. A soda is an ice cream based drink. Your soft drinks are called Pop...never soda. Vernors is the best pop to drink when feeling under the weather. It’s our “medicine”. P.S.S. Having had pan pizza(Detroit style) all my life, I’m finding it rather amusing that the rest of the world is just now discovering it.

Hi Jan, yes, I don't think anyone I know from the east coast has heard of Detroit pizza.. YET... and sorry, but I just can't call soda anything other than soda! But you're absolutely right ;)