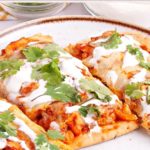 If you love Chicken Tikka Masala, then you're going to want to make this Tikka Masala Pizza with Naan bread! This pizza takes less than 10 minutes to put together and transforms leftover tikka masala into the most delicious Indian-inspired pizza.

I use naan bread instead of traditional pizza crust for this pizza because oft, oven-toasted naan makes the BEST pizza crust. I top this pizza with a drizzle of yogurt, which is optional but soo good to take the heat off the sauce!

Our favorite Indian restaurant always gives us so much tikka masala sauce that we never finish it in one night. But my frugal self just can't throw out delicious lick-your-plate-worthy sauce, so I came up with this Naan Tikka Masala Pizza!

This pizza works great whether you have leftover chicken in the tikka masala sauce, or just some sauce left over. Either way, it's SO GOOD!

We always order extra naan bread with this pizza recipe in mind, but store-bought naan works just as well for this recipe because baking the naan bread transforms it into the tastiest, softest, slightly-chewy, just-like-it-should-be pizza crust.

After having naan pizza, you'll wonder why not ALL pizza is made with naan!

And of course, you can use jarred tikka masala sauce with store-bought naan if you suddenly get a craving for some tikka masala pizza, and you can add some cooked chicken to the pizza as well.

For the yogurt drizzle and to serve:

→ The sliced onion is totally optional, but I like the little crunch that it adds, plus it cooks down a little while the pizza bakes and gives it a nice subtle onion-y flavor.

Step 2: Optional step, if you're using regular cooked chicken breast: In a bowl, mix together the cooked chicken with the curry powder and a pinch of salt and pepper.

Step 5: Bake at 350F for 11-13 minutes, or until the cheese is melted, the naan is lightly toasted, and the pizza is heated through.

Step 6: In a small bowl, combine the yogurt with 1-2 tablespoons water and mix well. Add more water if you want a thinner yogurt to drizzle. Spoon the yogurt over the warm pizza, and garnish with fresh cilantro leaves to serve. 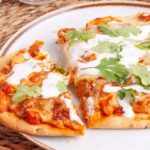 This Tikka Masala Pizza can be made with leftover chicken tikka masala, or with store-bought tikka masala sauce. I use naan bread as the pizza crust as it's the tastiest pizza crust. Read the notes for tips to make this amazing Indian-inspired pizza work for you no matter what ingredients you have on hand!
Prep Time5 mins
Cook Time12 mins
Total Time20 mins
Course: Dinner, Lunch
Cuisine: American, Indian
Servings: 4
Author: Kate
Prevent your screen from going dark

For the pizza:
For serving:

401 shares
Comments or questions about the recipe?Click here to cancel reply.

Found my dinner for tomorrow!! I have everything on hand!

This super fast & easy Indian pizza is amazing dear Kate! We can't find naan here, so we'll change it even more; artisan Greek pittas as the base, and the rest just like you mentioned them:) Thank you for the fantastic idea Kate! Pinned! xoxoxo

Your pizza looks so easy- no fussing with the pizza yeast dough- yet the taste is obviously there!

I cook Indian food pretty often. In fact, my favorite dish in the world happens to be Indian Chicken Biriyani. Have you ever tried it? Your pizza looks fantastic, Kate! Love the melted cheese and the masala sauce!!!!