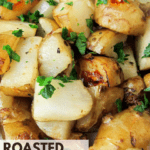 These Roasted Jerusalem Artichokes are crispy, caramelized and so addicting. I'll show you how to pick out good Jerusalem artichokes to make this side dish. 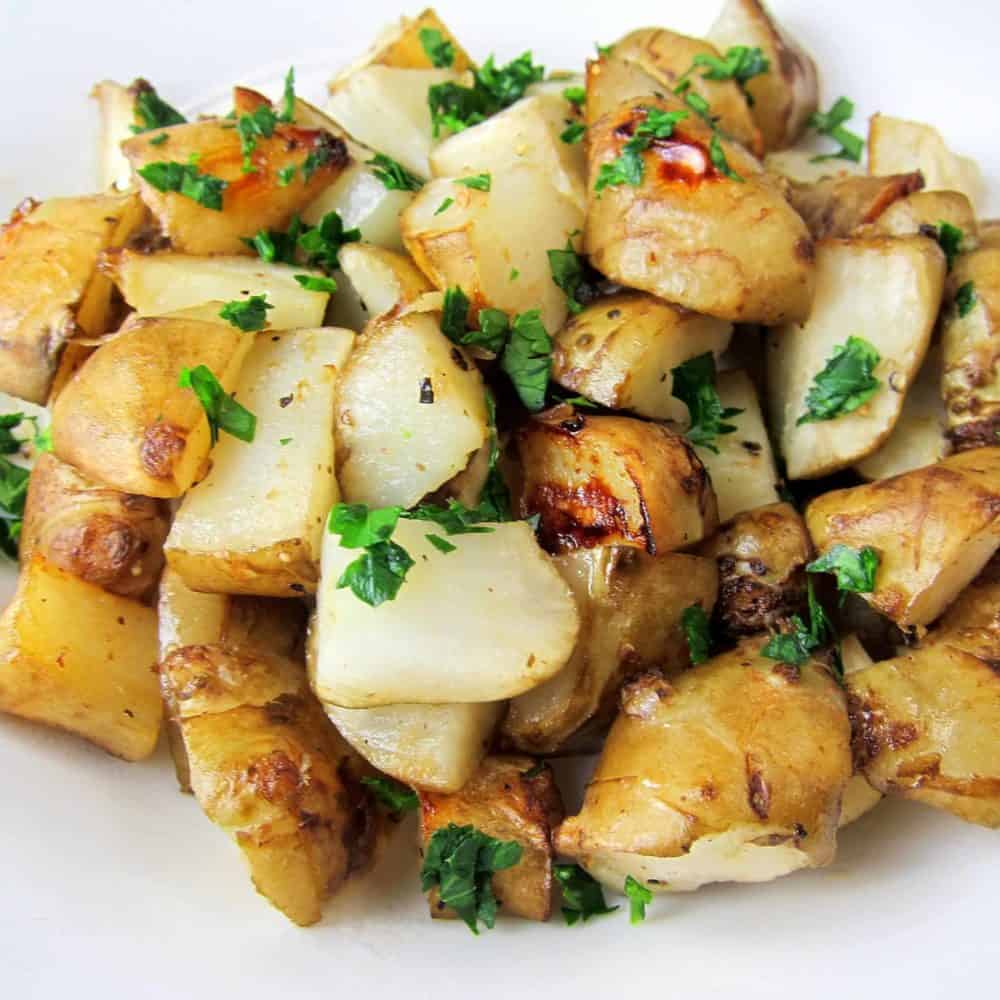 The other day I came across this awesome list of ''Ugly Vegetables" on CNN.com. And while I pride myself in being very diverse with my cooking and ingredients, there were several vegetables on this list that I have never heard of. (What the heck is a cardoon??)

So when I saw Jerusalem Artichokes at Whole Foods soon after, I knew I had to try them! I put them in my shopping cart right away. I was going to figure out how to cook them later. Minor details. 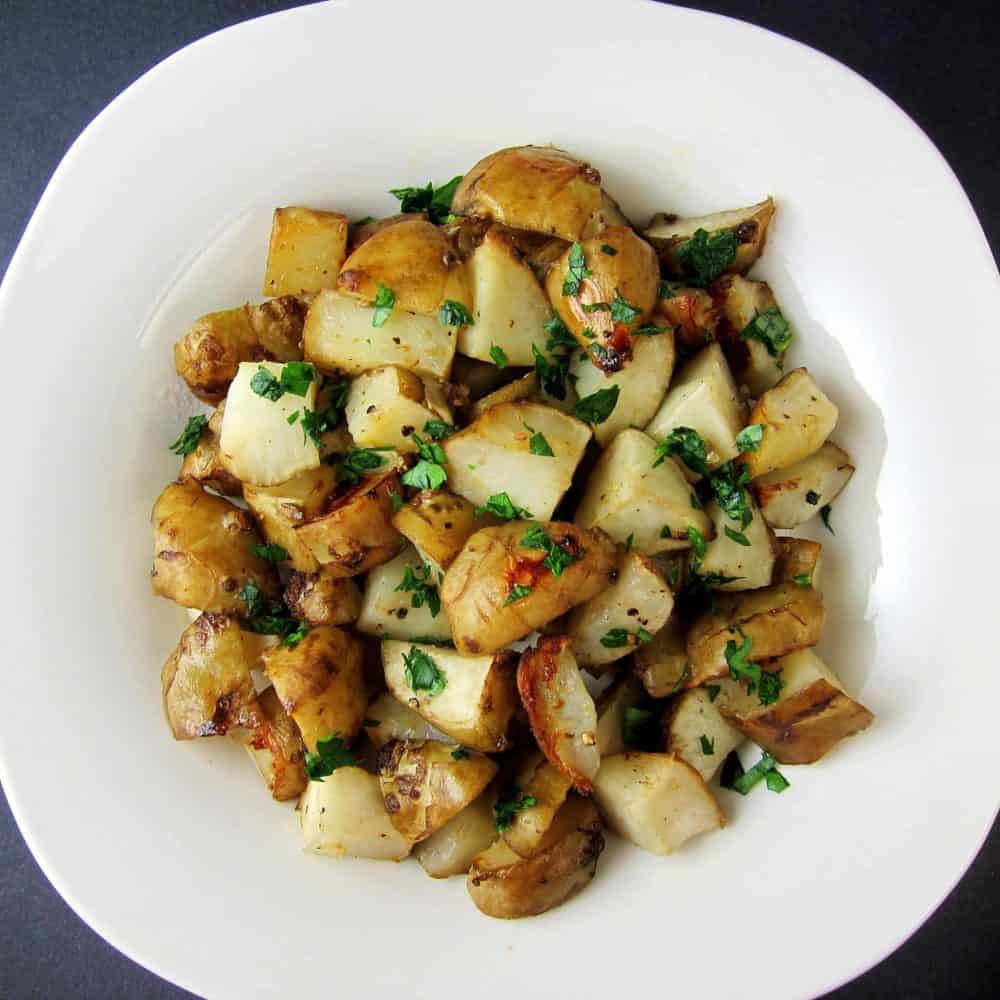 I came home and did what everyone does: I googled Jerusalem Artichokes to learn more about them and how to cook them. Here is everything I learned.

What are Jerusalem Artichokes?

Jerusalem artichokes are tubers, which means they are the roots of a plant. They look kind of like ginger roots, but they couldn't be more different. Jerusalem artichokes are the roots of these awesome flowers! I see these flowers all over the place and think they are so pretty - I love colorful bright flowers. I had NO IDEA they had such a tasty edible root underneath there. 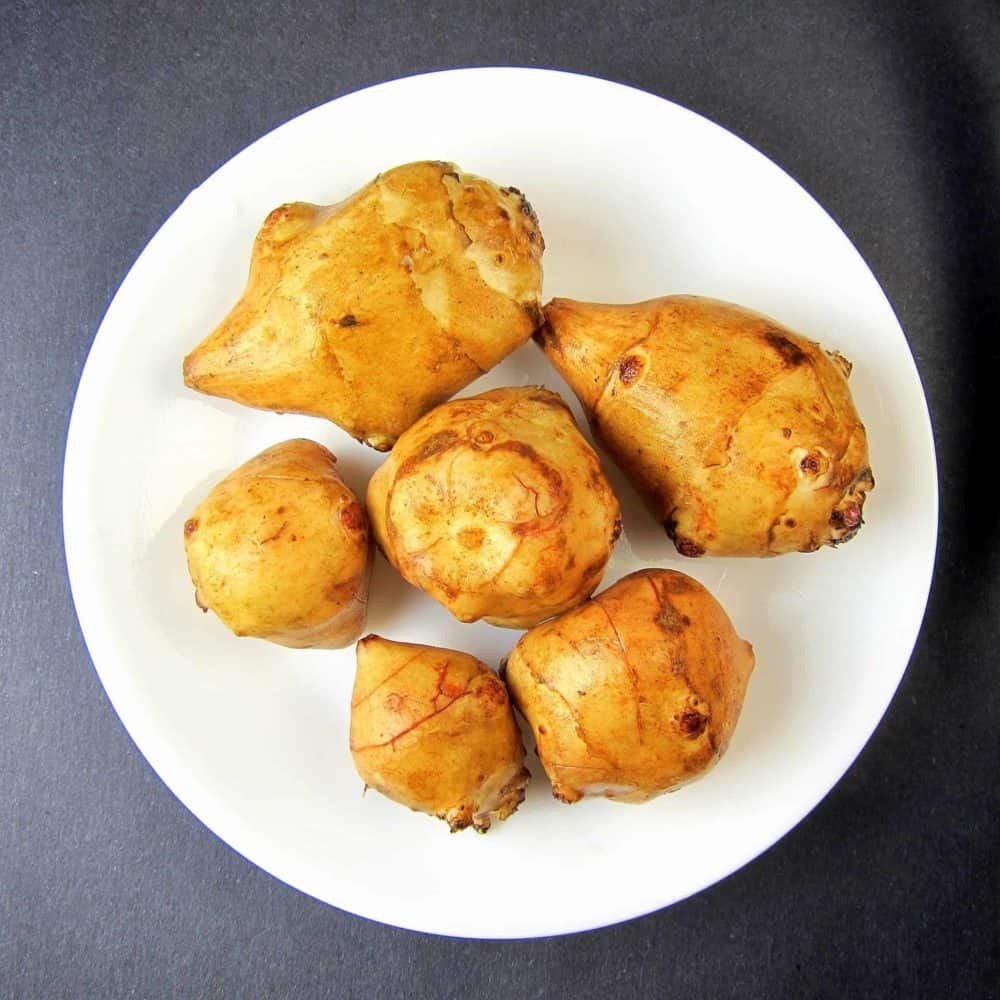 How do you pick out Jerusalem Artichokes?

The biggest obstacles to trying new fruits and vegetables are (1) picking out the good ones and (2) figuring out how to cook them.

If you can find Jerusalem artichokes that don't have have too many knots and knobs on them, it will be easier to clean them for cooking. There's nothing wrong with the knobs, they just need to be scrubbed a little harder to make sure they're clean.

You can typically fine Jerusalem artichokes at Whole Foods and other big grocery stores, next to the carrots and beets.

Here is a good guide on picking out Jerusalem artichokes.

Jerusalem artichokes are DELICIOUS when they are roasted. Right when you bite into them you might think it tastes like a juicy crispy potato, but in a few seconds you really taste the difference.

Jerusalem artichokes are nutty, slightly sweet, complex, but mild at the same time. SO different from a potato.

Do you need to peel Jerusalem Artichokes?

No need to peel Jerusalem Artichokes! Just give them a good scrub, making sure to scrub really well around the knobs to get any dirt out.

Can you eat Jerusalem Artichokes raw?

You can eat Jerusalem artichokes raw. But they taste much better cooked. Cooking them (especially roasting) brings out their natural sweetness and aroma. And it gives them the beautiful golden brown crispy color.

Making roasted Jerusalem artichokes is super simple and you need only a few ingredients. Just toss the chopped pieces in olive oil, garlic, salt, and pepper and load them up on a large baking sheet. Don't overcrowd the pan. You'll want to make sure the pieces aren't touching so they get nice and crispy.

Why are they called Jerusalem Artichokes?

Jerusalem artichokes have absolutely nothing to do with Jerusalem or artichokes. According to Wikipedia:

"The origin of the "Jerusalem" part of the name is uncertain. Italian settlers in the United States called the plant girasole, the Italian word for sunflower, because of its familial relationship to the garden sunflower (both plants are members of the genus Helianthus). Over time, the name girasole (pronounced closer to [d͡ʒiraˈzu:l] in southern Italian dialects) may have been changed to Jerusalem."

Jerusalem artichokes are also often called sunchokes and topinambour, but who wants to try to prounounce that??

If you enjoyed this recipe, don't forget to leave a rating below and save it for later on Pinterest! 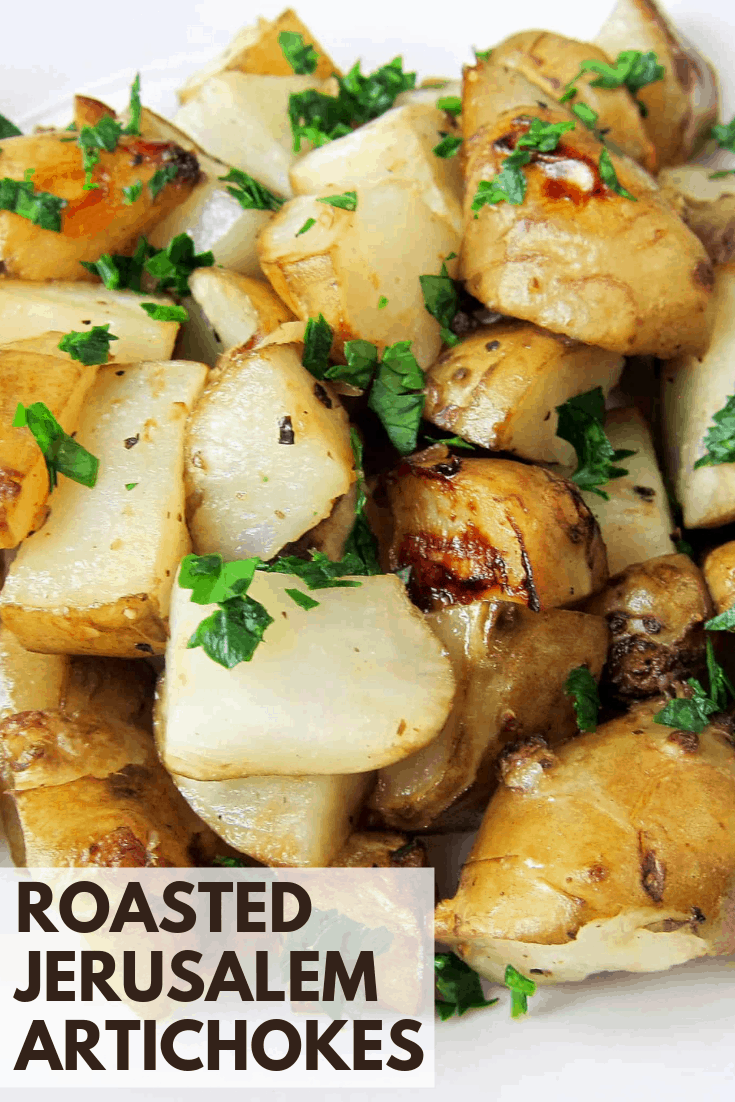 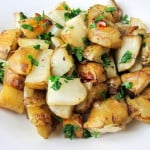 You can roast Jerusalem artichokes longer than 20 minutes (try 25 - 35 minutes) if you like your vegetables softer instead of crunchy.

Have you ever had Jerusalem Artichokes? Did you like them?

2.8K shares
Comments or questions about the recipe?Click here to cancel reply.

I have a pound of these in my CSA this week. Going to try them this weekend. These are a perfect prebiotic (insoluble fiber) and wonderful for gut microbiome; hence, the gas and other G.I. symptoms mentioned in previous comments. Looking forward to trying them using this recipe

Oh that's really good to know, thanks for mentioning that!!

I've never had these cooked before, they turned out yummy!

I hope they make it into your vegetable/side dish rotation!!

Hi Kate A friend just gave me a bunch of Jerusalem artichokes from her garden so I’m glad to find this recipe. As to your question, “What the heck is a cardoon?” I have eaten these in Italy and loved them. I have never seen them for sale here so I planted some seeds (in the above friend’s garden, because I can’t grow a thing!). Cardoons look like huge stocks of celery with rippled edges. They are a late fall vegetable and in Italy, popular at Christmas. Italians like to parboil them, then fry them in a light batter and sprinkle with parmigiana. I have also had them stewed with onions and tomato. Cardoons taste a bit like artichokes; it’s hard to describe the taste. One warning is that they are hugely labor intensive because they have strings in them like celery. But unlike celery the strings are totally inedible and need to be pulled off. In Italy friends sit around the table doing this together. Thanks again for the cooking help. Your mom’s friend Paula

Hi Paula!! Enjoy the Jerusalem artichokes! And the recipe you describe for cardoon sound really good (even if labor-intensive), I hope I get to try them sometime.

Ha ha! I've been growing them for a few years and just tried them with this recipe last night. Totally delicious! But it all started with gas, and then more gas, and then horrible diarrhea and cramping for a good chunk of today. I even took my temperature a couple times to make sure I wasn't coming down with something else. Maybe I need to just eat a little when I eat them. Maybe add some vinegar into the roasting mixture? I think that sounds like it'll be yummy, anyway - not sure if it'll help the digestion issues.

I LOVE Jerusalem Artichokes! Roasting helps with the gas. Tomorrow, I am going to make jerusalem artichoke relish. I think the vinegar will help even more to cut down on potential gas problems.