Skip to Content
This post may contain affiliate links. As an Amazon Associate I earn from qualifying purchases. See my disclosure.
Jump to Recipe Print Recipe 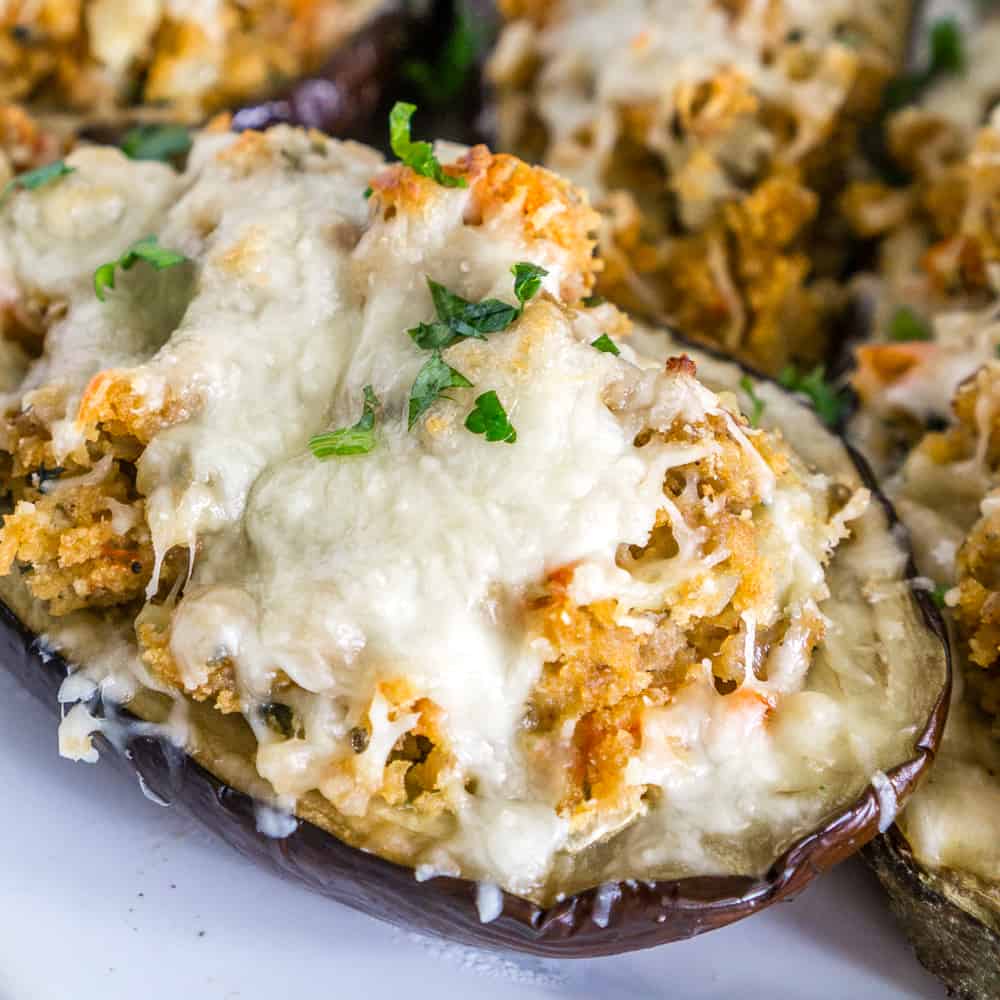 I originally posted this Sausage Stuffed Eggplant recipe in 2014, and now I am updating the blog post with new photos including lots of step-by-step instruction pictures to help you make this amazing eggplant dish. 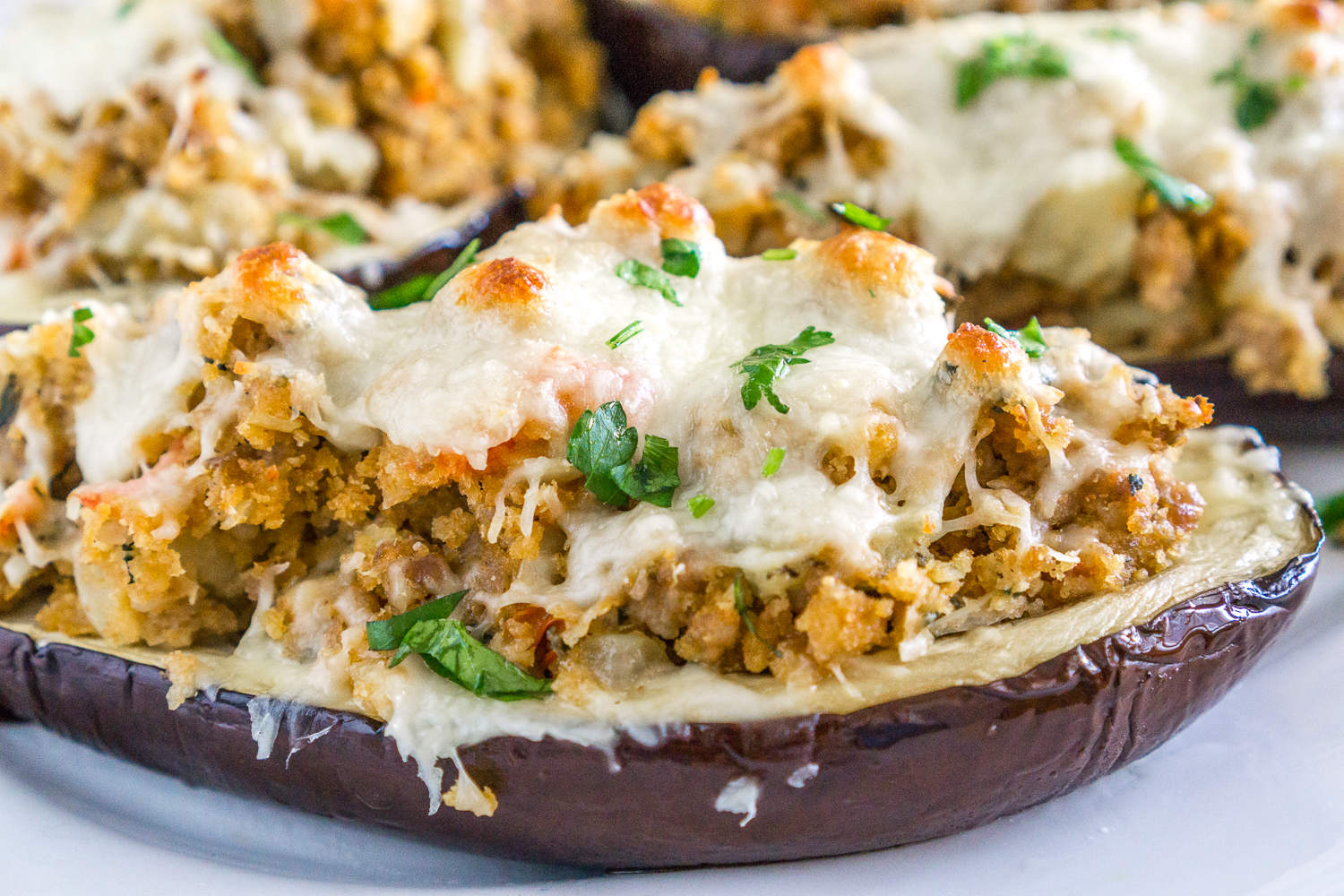 I would say that aside from eggplant parmesan, this is my favorite way to eat eggplant. Ever. This is probably because I am not a huge fan of eggplant on its own. But I do love me some eggplant when it is combined with other flavorful ingredients such as sausage and cheese.

In this recipe I make a delicious stuffing made out of Italian sausages mixed together with fresh tomato, onions, herbs, breadcrumbs, and chopped roasted eggplant. Then all of that stuffing gets stuffed into individual-sized roasted eggplant boats, topped with cheese, and baked again until the cheese is perfectly melted. 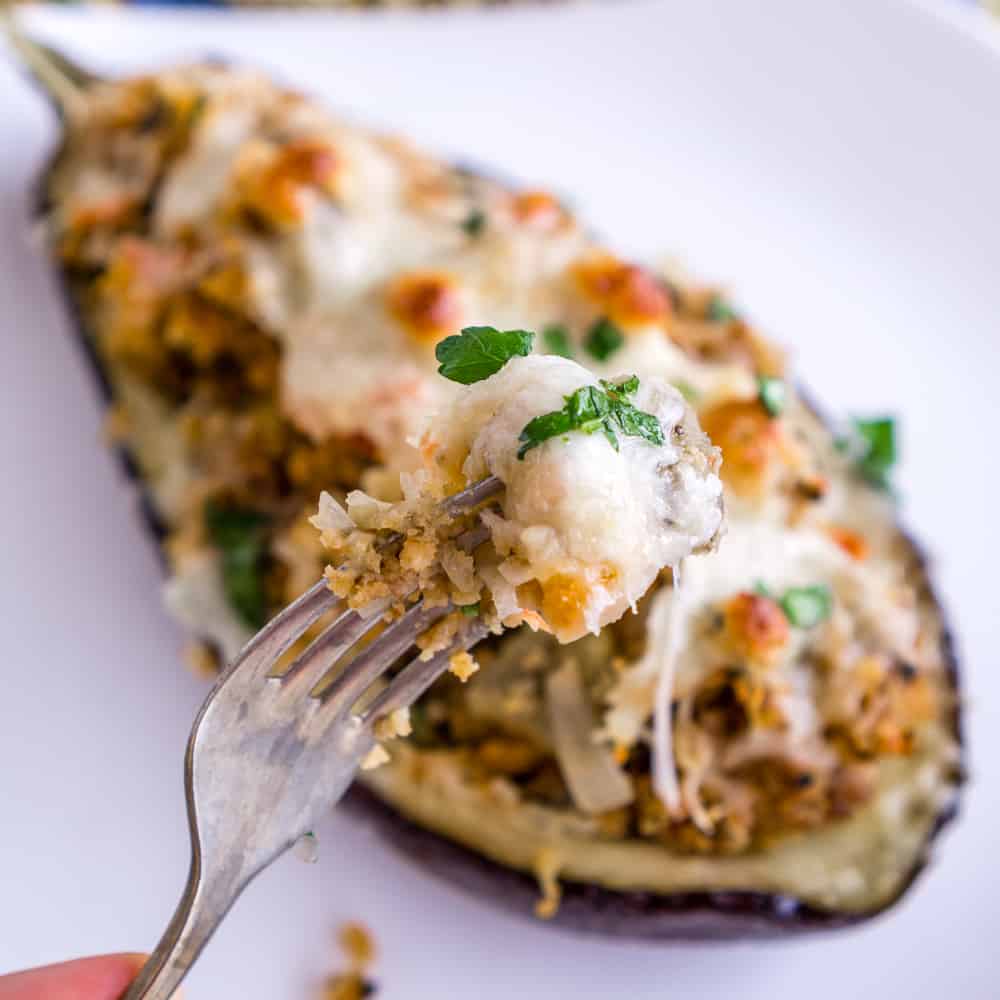 A few notes on the ingredients for this eggplant recipe:

How to make Sausage Stuffed Eggplant:

Start by slicing the eggplant in half and roasting them in the oven. When they are done roasting you'll use a knife to loosen the cooked eggplant flesh and then use a spoon to scoop out the flesh. Roughly chop up the scooped out flesh and mix it with the sausage stuffing. Stuff it into the eggplant, top with cheese, and bake.

While the eggplant halves are roasting, you prepare the sausage filling on the stove top:

Start by frying sausage meat and onions over high heat. Add the diced tomato, garlic, and herbs. Remove from heat and stir in the breadcrumbs and chopped cooked eggplant. Stuff this delicious sausage mixture into the eggplant boats, top with cheese, and bake until the cheese is bubbly and melted. 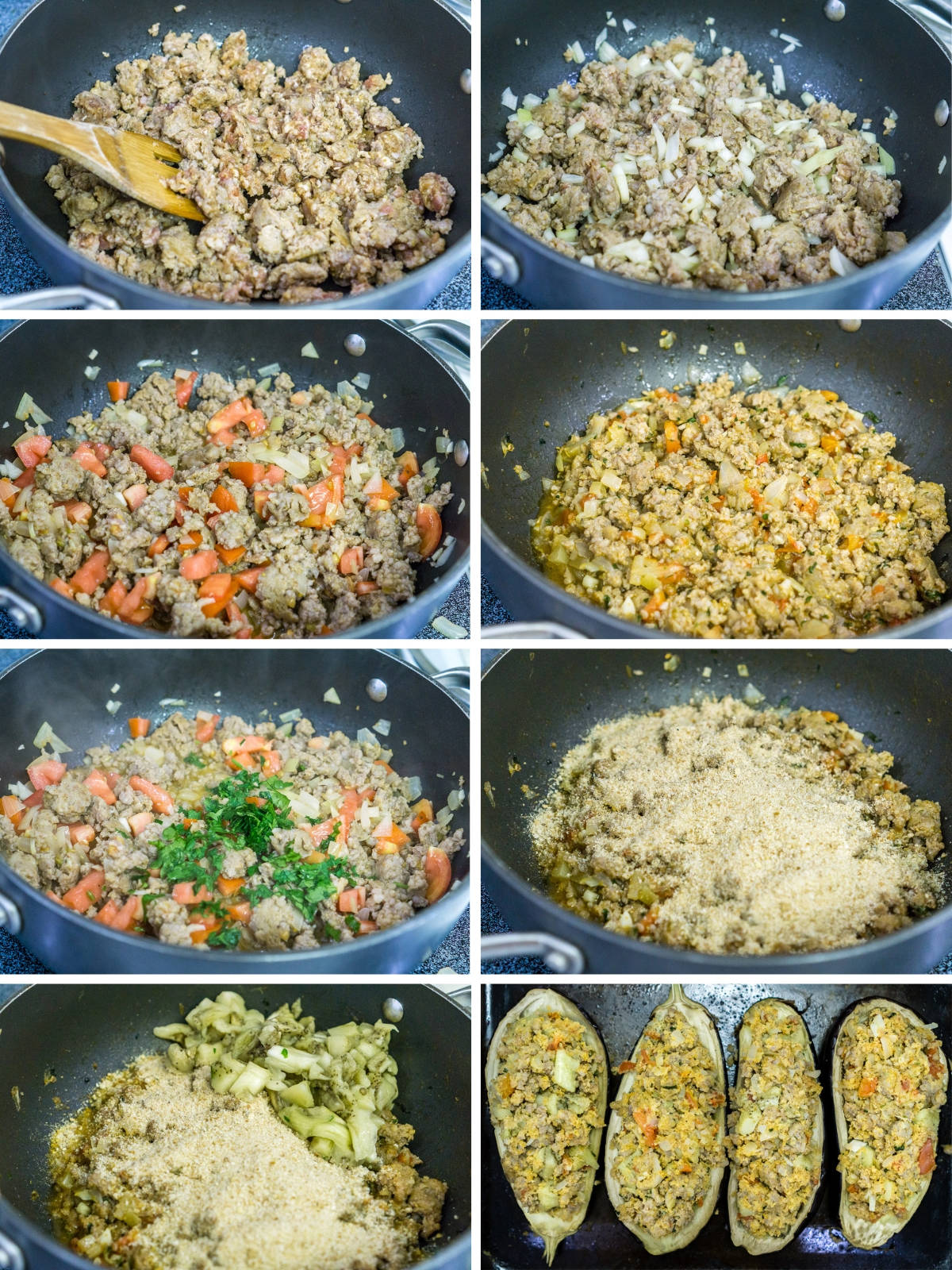 Then you carve out eggplant boats, add the eggplant flesh to the sausage filling, and stuff the eggplant. Top everything with a healthy dose of cheese, and bake until the cheese melts.

Is this recipe better for weekends or weeknights?

It does take about an hour to make this sausage stuffed eggplant from start to finish. So this is a good recipe to have on hand for a weekend dinner. But you can totally swing this on a weekday too: just roast the eggplant the night before. The stuffing only takes about 15 minutes to prepare, and then you can pop the stuffed eggplant into the oven and bake for a quick 15 minutes until the cheese melts and everything is nice and heated through.

What to serve with sausage stuffed eggplants:

Each of these eggplant boats is a pretty large portion and is a complete meal on its own with a large serving of vegetables, protein, and some carbs. Because of this, I would recommend serving these eggplants with just a light side salad, just so your plate doesn't look empty with just one eggplant on it. But of course you can always serve this with some pasta with marinara sauce or some rice if you're feeling extra hungry.

Did you enjoy this recipe? Let me know with a comment and a star rating below! And don't forget to save it for later on Pinterest: 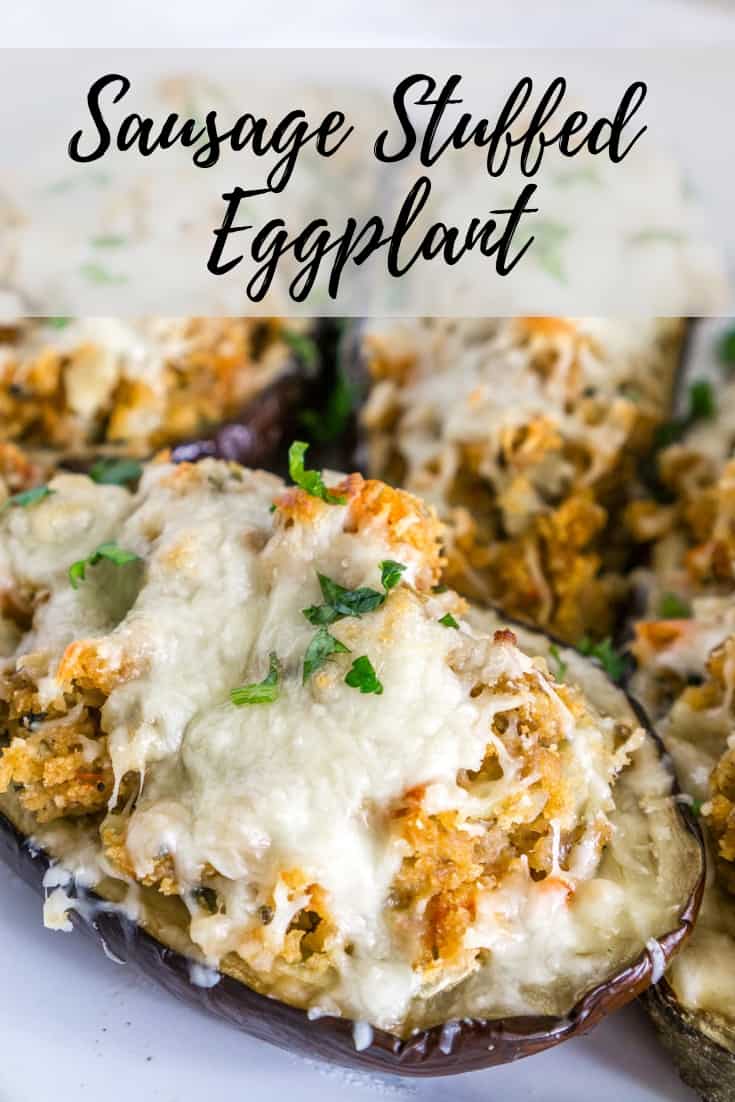 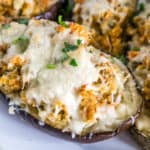 Check out these other delicious Eggplant recipes from the archives: 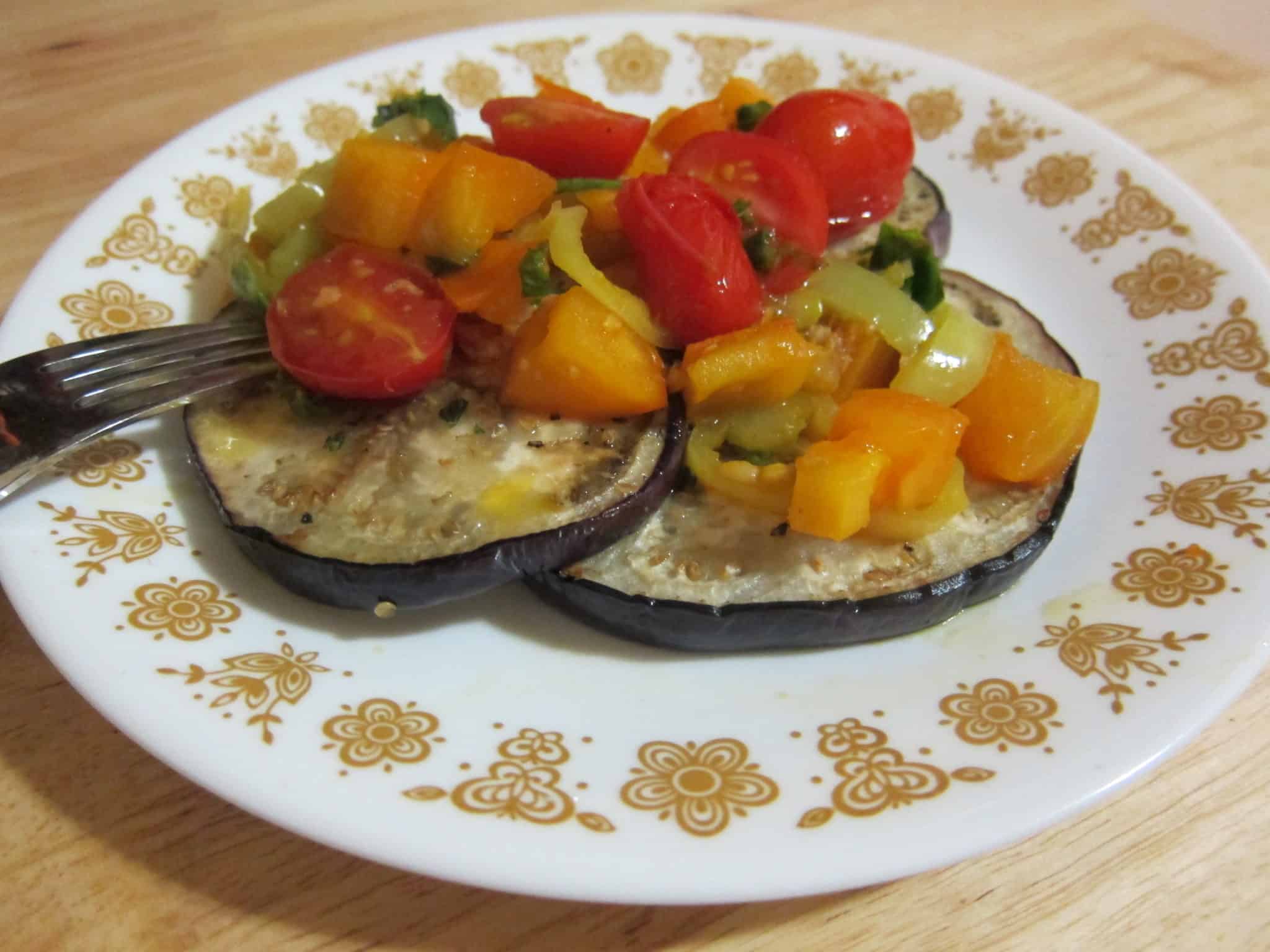 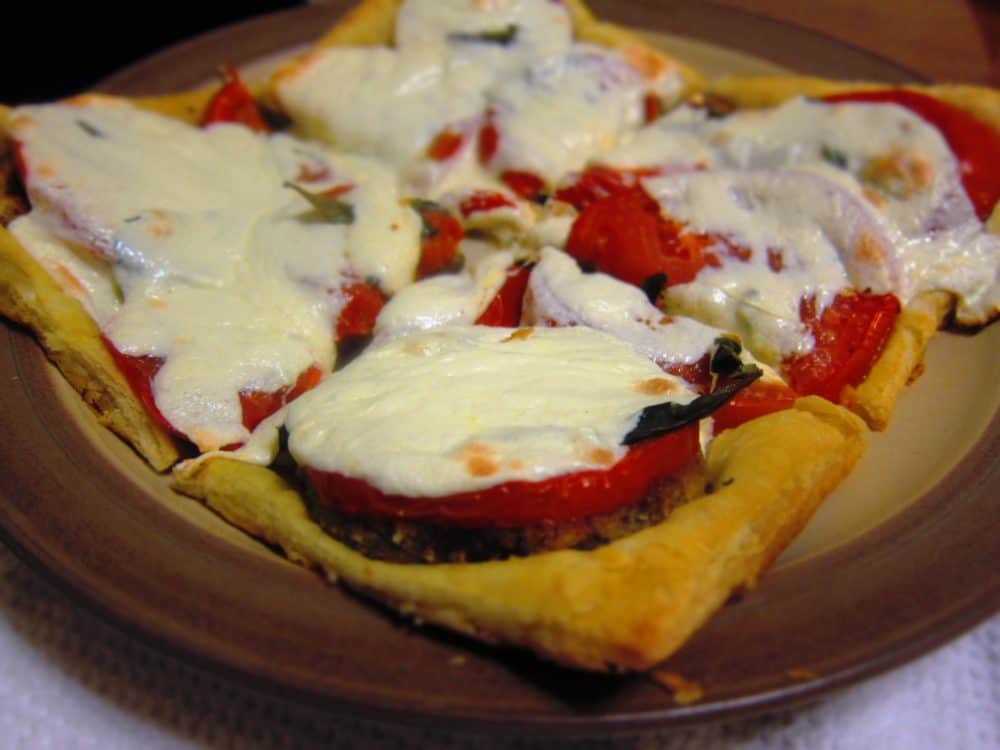 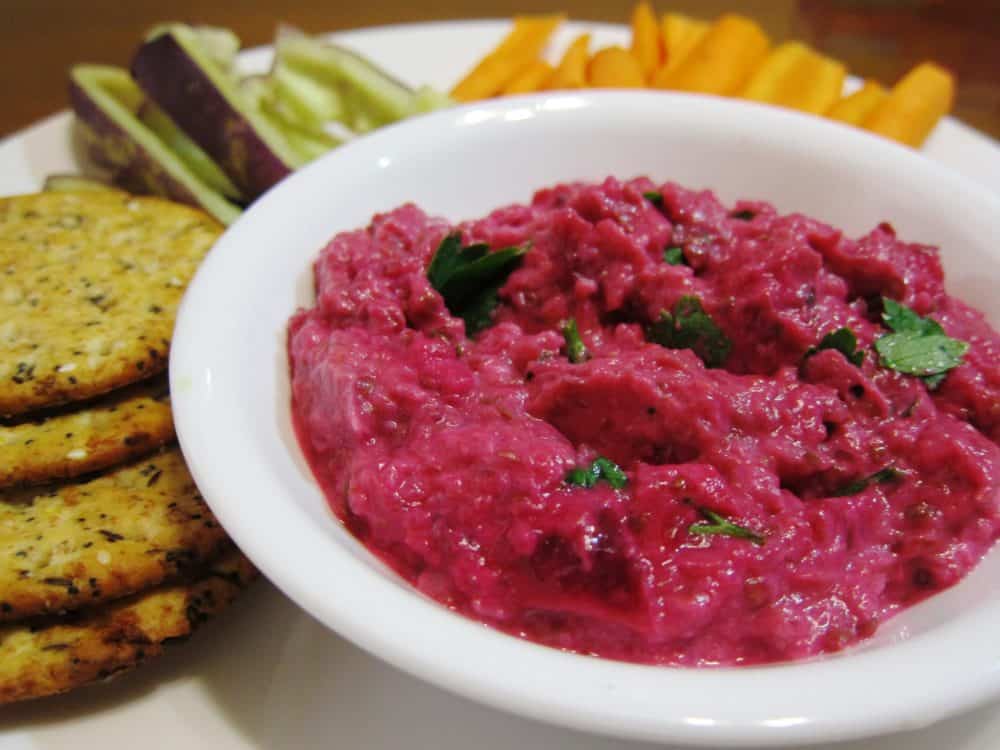 What are your favorite eggplant recipes?

626 shares
Comments or questions about the recipe?Click here to cancel reply.

What a delightful meal. This is my kind of food.

Thanks! It was good, healthy yet very satisfying because of the sausage in the stuffing. I obviously used store bought sausage, but I do plan on making my own breakfast sausage after seeing your recipe - that looks amazing!

I was just telling my fiancé about your recipe and my big plans to make sausage :)