You are here: Home / 30 minutes or less / Soba Noodles with Chicken and Vegetables in a Spicy Peanut Sauce
This post may contain affiliate links. As an Amazon Associate I earn from qualifying purchases. See my disclosure. 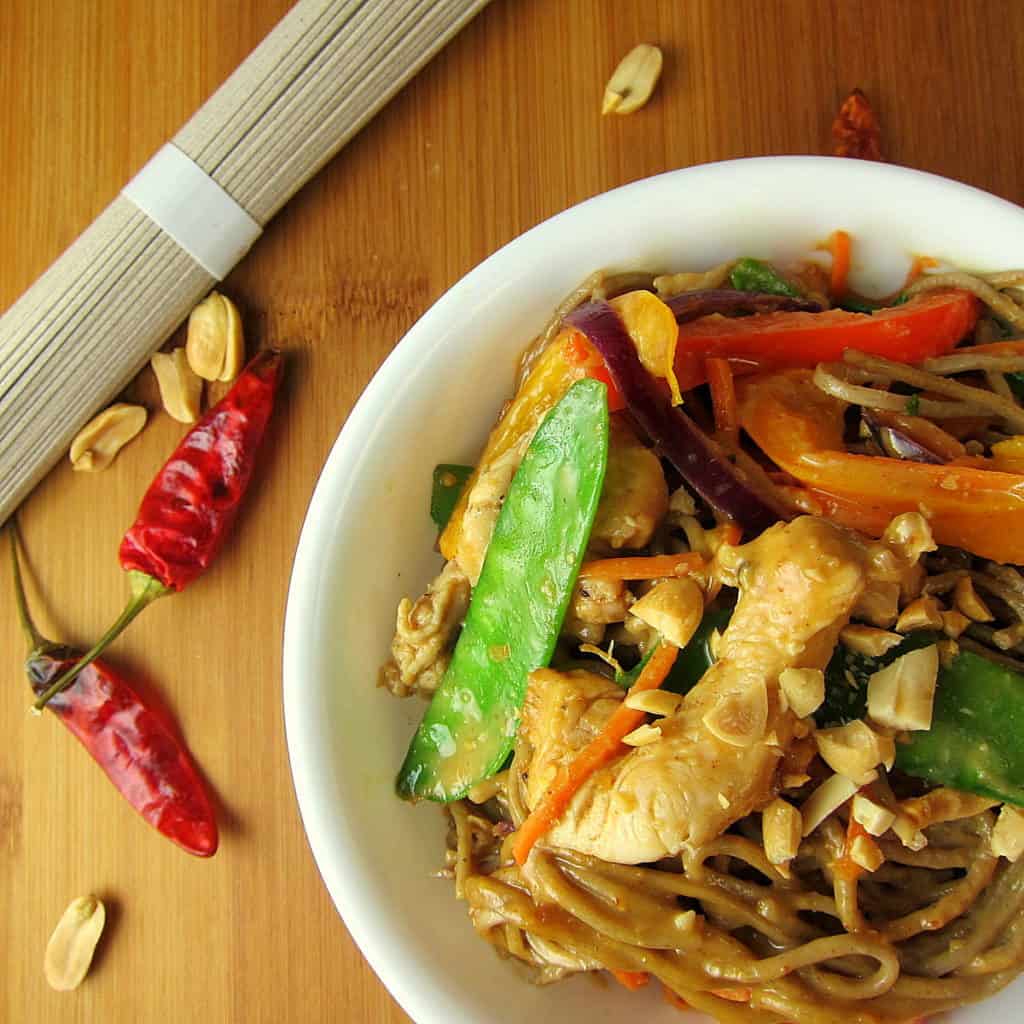 Guys, I just recently found out that buckwheat is a seed, not a grain. I always thought buckwheat was a type of wheat, and never bought it because I figured we eat enough grains (even if they are whole grains most of the time). But I recently learned that buckwheat is a seed, which means that it is higher in protein and fiber than wheat. But unlike quinoa and amaranth – the other two healthy seeds that we eat as a side – buckwheat is really cheap (though not as trendy, I admit).

Buckwheat groats are a popular side dish in Russia and Ukraine, and I grew up eating buckwheat never knowing how good it is for me. So I will be posting some buckwheat recipes sometime in the near future after I get around to making them.

But in the meantime I went and bought some Soba Noodles – Japanese noodles made of buckwheat and regular wheat flour. These noodles are made out of at least 50% healthy ingredients (buckwheat flour is listed first on the package before wheat, therefore there should be more buckwheat than wheat in the noodles). I am really excited because I love all kinds of noodles and pasta, but try to not eat so much of them for health reasons. But now I will be eating a lot more soba noodles!

And the great thing is that it is so easy to make these noodles into an even healthier meal – just throw in a ton of vegetables and lean chicken breast. The delicious peanut sauce does have fat in it, but if you use all natural peanut butter, it is just fat from peanuts, and it is a healthy fat. 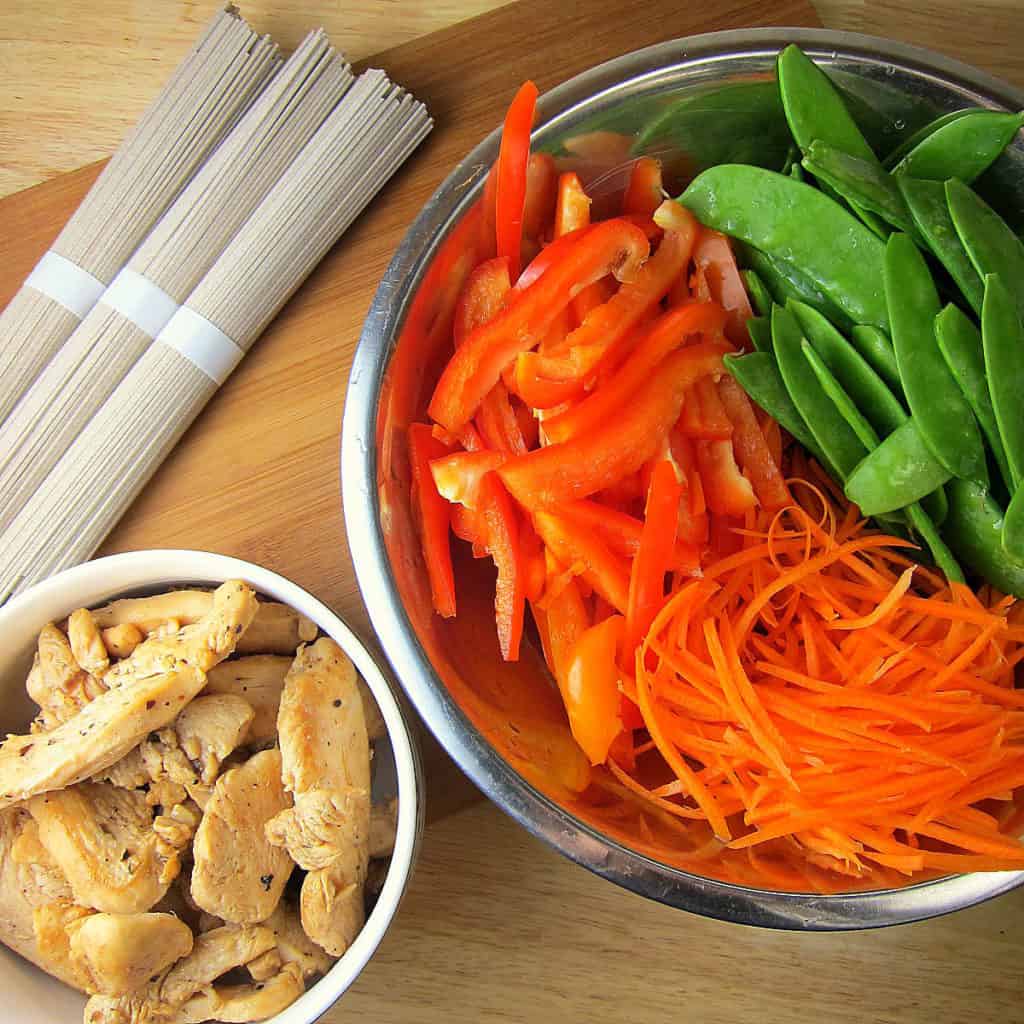 Look at all the vegetables and lean chicken breast going into this dish! I don’t feel guilty one bit about the peanut sauce. 🙂

Soba noodles usually come packaged in these neat little bundles that are about 3 oz each. I used 3 of the bundles because I wanted to make sure that we had leftovers. If your bundles look much bigger than the bundles below, then use only 2.

This recipe is totally do-able in 30 minutes, you just have to use the time that the water is boiling to either chop the vegetables or put together the peanut sauce.

Soba Noodles with Chicken and Vegetables in a Spicy Peanut Sauce

Some notes before you get started:

1. Slice the chicken breasts into thin slices. Season the sliced chicken with salt and pepper.

Stir fry the chicken in 1 tablespoon of either sesame or vegetable oil until it is fully cooked (about 7 minutes). Set aside.

2. Boil a large pot of water. When it comes to a boil, add the soba noodles and cook according to the directions on the package. My package said to cook them for 5 minutes, but I tried them after 3 and they were a perfect al dente, so I drained them from the hot water after 3 minutes. It is better to slightly undercook the noodles than to overcook, since we’ll be heating them up again in a few minutes to toss them with the hot peanut sauce.

Once the noodles are drained, rinse them in cold water and set aside.

3. While the water for the noodles is boiling, prepare everything else:

4. Prepare the peanut sauce: Combine all the ingredients in a medium bowl and stir until they are well combined. The sauce will look chunky at first before the peanut butter gets well mixed with the rest of the liquid ingredients, but it will turn smooth if you keep stirring. Start with 1 Thai chili pepper and see how you like the spiciness. Add the second one if you want more heat.

5. Now you’ll cook everything together in the peanut sauce: In a large wok or a huge skillet with high sides, heat up the other tablespoon of oil. Stir fry the sliced onion for 2-3 minutes, or until it starts to soften. Add all the vegetables – sliced peppers and snow peas – and stir fry for another 2-3 minutes to get them warmed up as well.

Add the chicken, cooked soba noodles, and the sauce, and stir fry for 2-3 minutes until everything is coated in sauce and is warmed up. 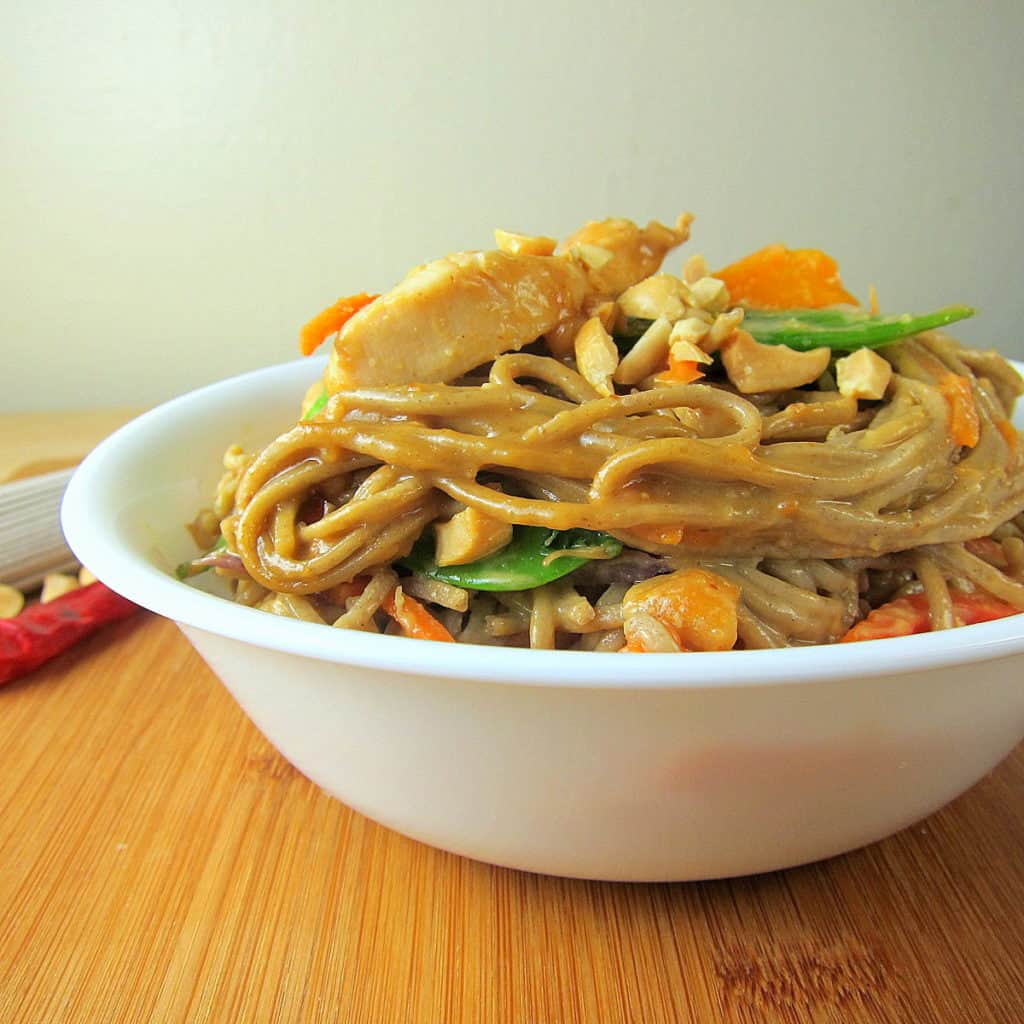 Have you had soba noodles? Do you like them?

Hi! My name is Kate. Thanks for stopping by my little corner of the internet! Here you will find lots of delicious, easy, wholesome recipes for busy families. Happy cooking! [Read more about me...]

As an Amazon Associate I earn from qualifying purchases. See my full disclosure.