Skip to Content
This post may contain affiliate links. As an Amazon Associate I earn from qualifying purchases. See my disclosure.
Jump to Recipe Jump to Video Print Recipe 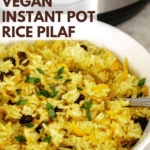 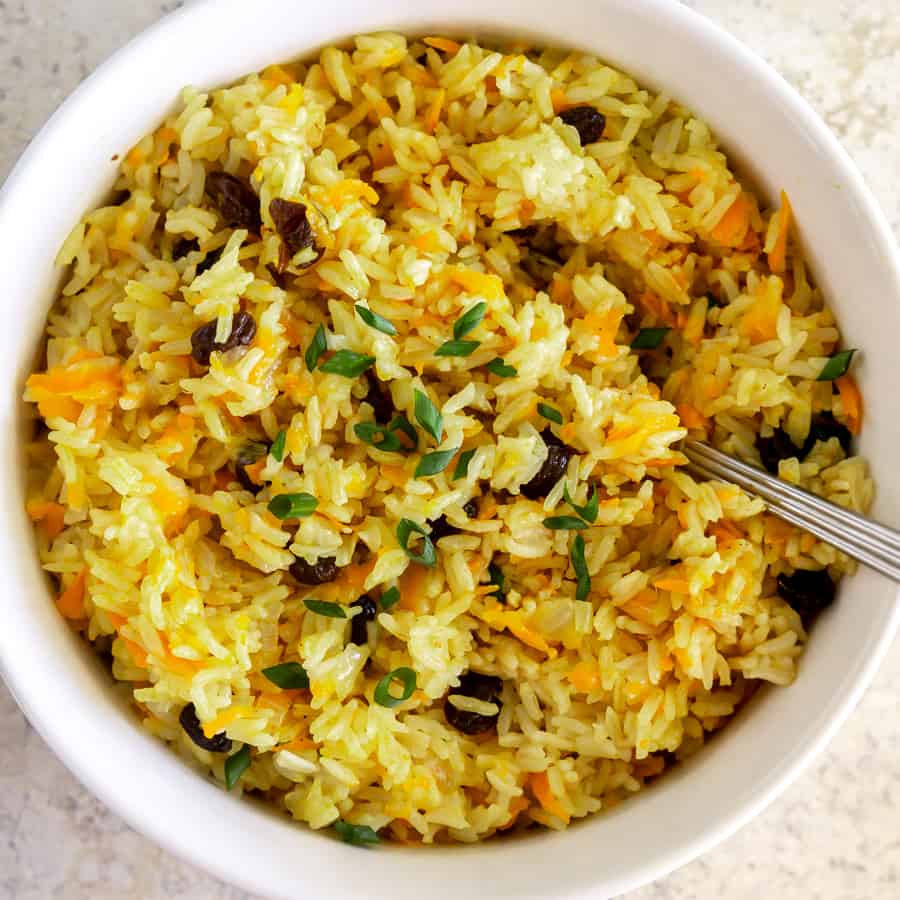 I created this Instant Pot Rice Pilaf recipe because I was craving something new, different, and because I was trying to get my son to eat some hidden vegetables. Well, it worked!

This recipe was definitely new to us when I first thought of it. But by now we've made it several times over the last two months because it's just so good and so easy! And yes, my son is now eating hidden carrots that are in this rice pilaf recipe. Win win!

Here is a quick video of how to make Vegan Instant Pot Rice Pilaf:

Rice Pilaf (also sometimes spelled pulau, plov, or pilau) is a very common dish in the Balkan peninsula, as well as in Afghanistan, Kazakhstan, and Uzbekistan. It is a recipe traditionally made with lamb (or beef) and lots of spices. There are a million different variations of it, and every region has its own version of rice pilaf.

Well I wanted to make a meatless rice pilaf, because my son is allergic to beef and my husband is not a huge fan of lamb. I still wanted to have all the rich flavor of a traditional pilaf, so I added some cumin and coriander to imitate the smokiness of browned seared meat that would typically go into a rice pilaf recipe. And then I added some raisins, to add a touch of sweetness that resembles the caramelization you would get from searing meat for a rice pilaf. 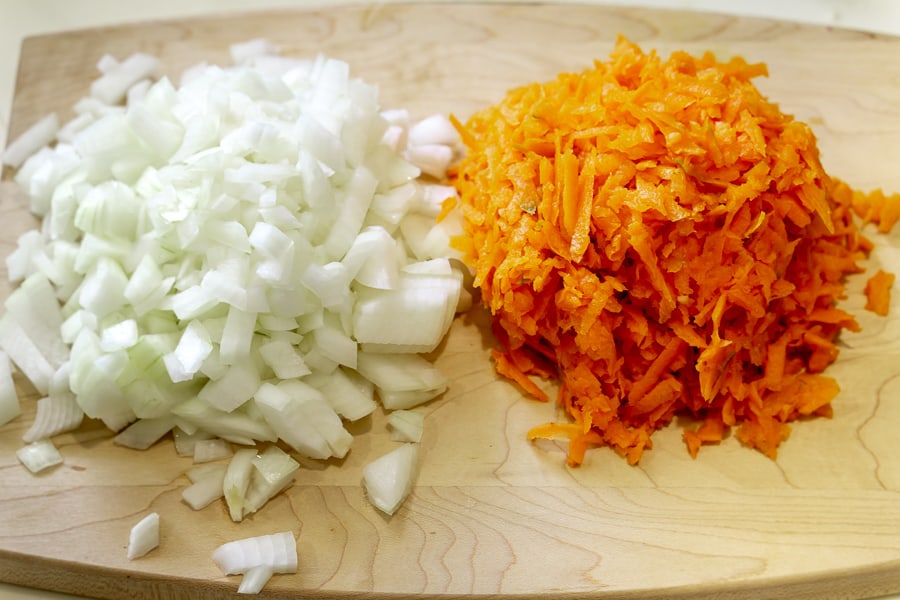 And of course, in typical Babaganosh fashion, I added a ton of onion and carrots, because I like to add extra veggies to everything. There are almost 4 cups of veggies in this recipe! Pretty good for eating rice, eh?

The onions get slightly caramelized during the sauteing step of the recipe and you can't even feel them in this recipe. And the carrot is grated instead of chopped so it just cooks down and gives the rice a lovely all-natural yellow color, just like you would get from a rice pilaf made with meat.

So yea, I'd say this vegan rice pilaf is a huge success. 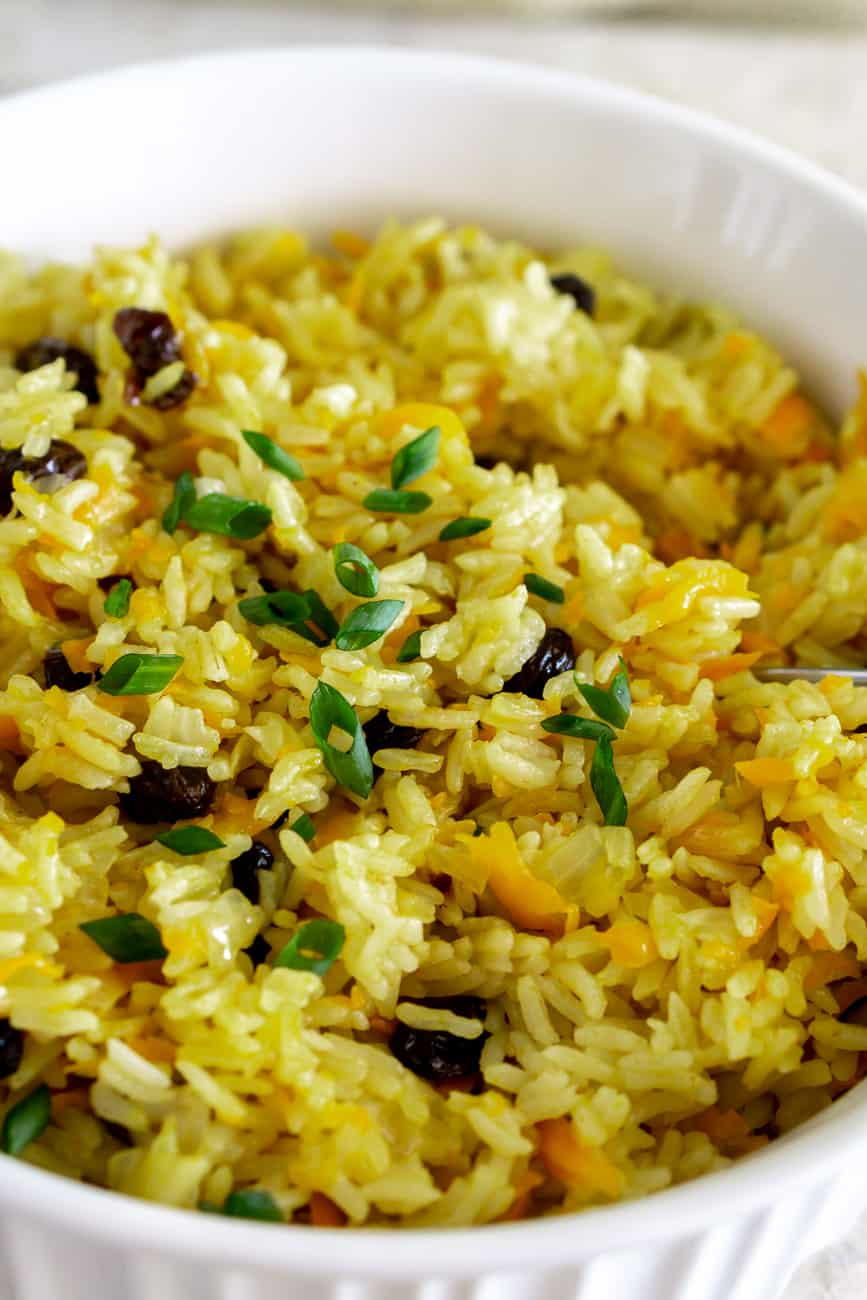 What to serve with vegan Rice Pilaf:

Ironically enough, we ate our vegan rice pilaf with salmon one day, and chicken the next. As I said, I didn't necessarily want to go vegetarian with our meals. I just wanted to add some hidden vegetables to rice (which is one of my picky toddler's preferred foods) and I wanted to avoid beef and beef broth. By the way, if you have picky eater kids, check out my other blog High Chair Chronicles.

If you're trying to eat vegetarian, you can have this with roasted vegetables (such as my roasted cauliflower, or roasted radishes). Or you can add some pan-seared tofu or roasted chickpeas on top for some protein. 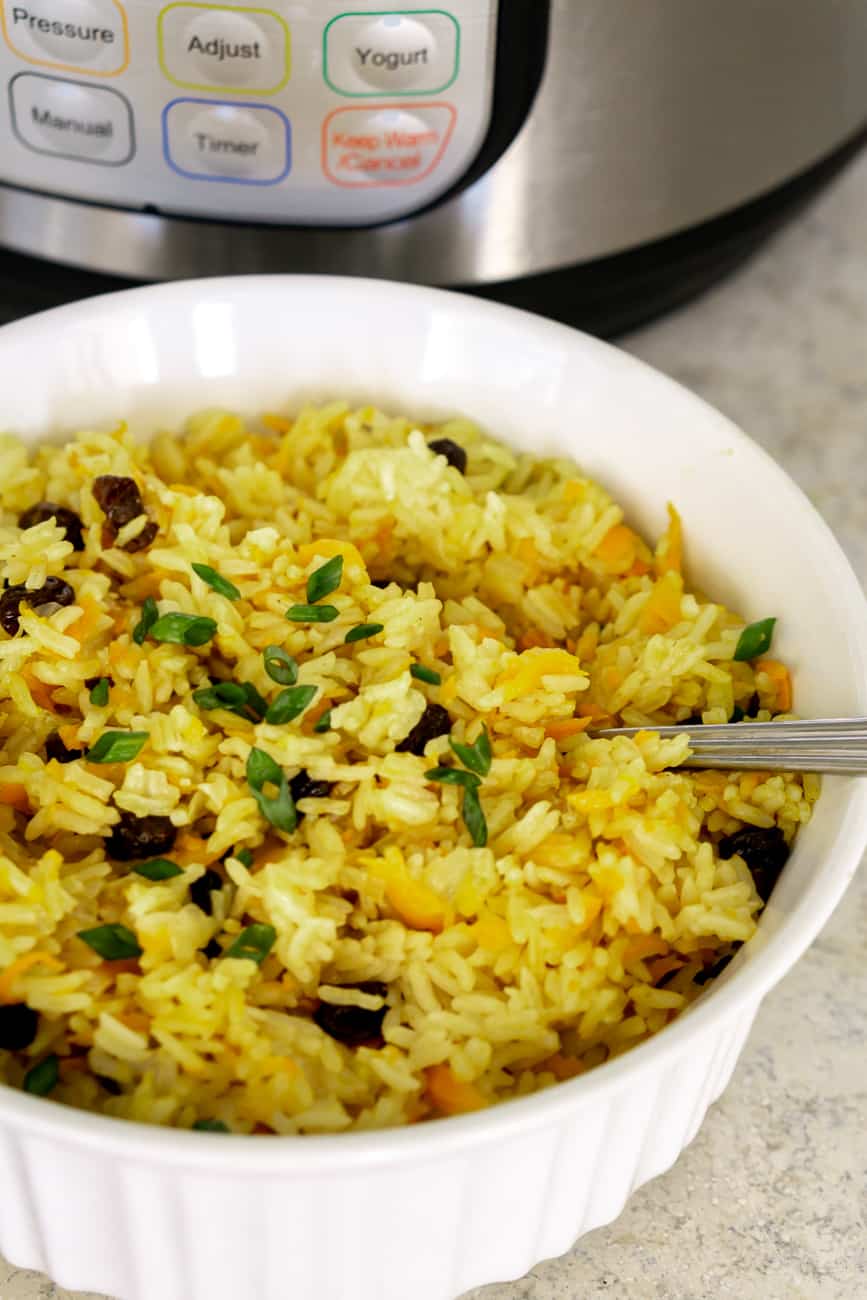 This recipe is made in the Instant Pot. I saute the onion, carrot, and spices right in the Instant Pot, then add the rice, raisins, and water. I cook it for 5 minutes instead of the usual 4 minutes, just because the Instant Pot is heated up from sauteing and won't take that long to come to pressure, which means that 4 minutes cooking time is not enough for rice. (Although typically the Instant Pot cooks white rice in just FOUR MINUTES. What kind of magic is that??)

I absolutely LOVE using my Instant Pot for cooking rice.

If you don't have an Instant Pot, I urge you to get one. It will save you so much time in the kitchen. This is the one I have, I decided to go for the 8-quart one. This 6-quart one is the one most normal people have.

If you do have an Instant Pot but are not using it as much as you hoped, may I recommend this Instant Pot video course? It's a series of quick right-to-the-point videos from an Instant Pot cookbook author that will make you an Instant Pot guru. The course covers everything from basic uses to advanced techniques. It's a worthwhile investment.

For this recipe you'll need a grater (I recommend a box grater such as this one, it's sturdy and easy to use), raisins, and a couple of spices in addition to the Instant Pot, rice, onion, and carrot. If you're weird about raisins in your food, we can't be friends. Just kidding, I get it. But try it just once in this recipe OK? Give them a chance.

You might also enjoy these other rice based and vegan recipes:

Did you enjoy this recipe? Let me know with a star rating and a comment below! I love to hear from you. And don't forget to share it on Facebook and save it to Pinterest for later. 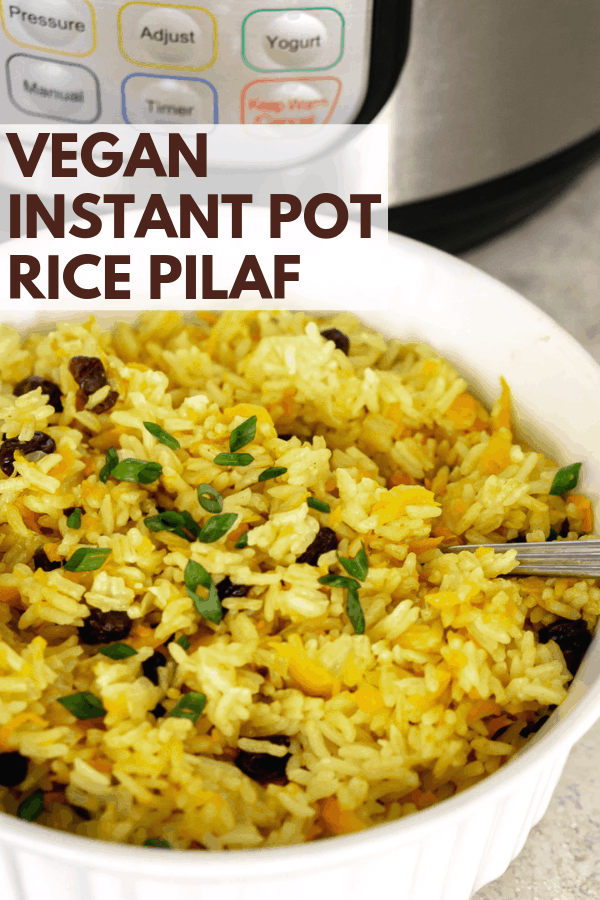 276 shares
Comments or questions about the recipe?Click here to cancel reply.