A hearty filling dish of buckwheat kasha with bow tie pasta, this Varnishkes recipe is a traditional Eastern European / Jewish food and is amazingly delicious for such a simple combination of ingredients. Serve it on its own as a side dish. 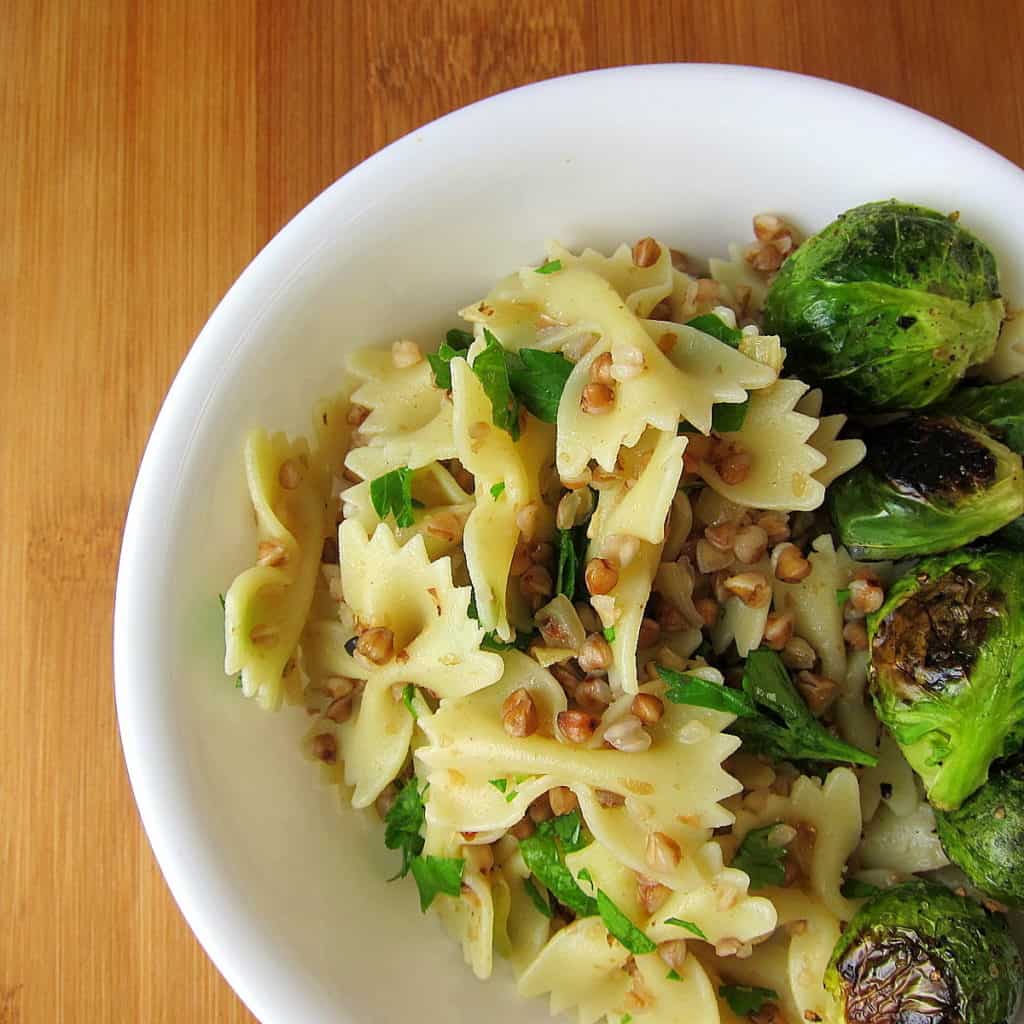 I grew up eating buckwheat, but then kind of forgot all about it for a while. A few years ago I learned how healthy buckwheat is, and since then I've been cooking with it more and more.

I wrote about buckwheat's nutritional value, where to buy buckwheat, and ways to cook with it in this recipe: Buckwheat Kasha with Mushrooms. Go read all about it! And you also want to check out this Buckwheat Bowls with Roasted Vegetables recipe.

Buckwheat is a regular ingredient in my family's cooking, and this time I wanted to share this Varnishkes recipe with you. It's a traditional eastern European Jewish buckwheat recipe.

Side note: If you were to search for varnishki on google, for some reason ''varnishkes" is what google suggests you should be searching for. But ''varnishki" is already plural, so there is no need to add the 's' at the end, or change the i to an e.

Varnishkes is a dish is simply seasoned only with salt, pepper, and parsley. But the great thing is that you can spruce it up very easily - just add some Parmesan when serving, add some crushed red pepper when stir frying the onion and buckwheat together, or try different herbs such as dill or basil.

I used bowtie pasta because that is how my grandma makes this dish, but feel free to use any kind of pasta you like. Next time I will use a whole wheat pasta, but I wanted Aldo to try it the traditional way before I start messing with the recipe. 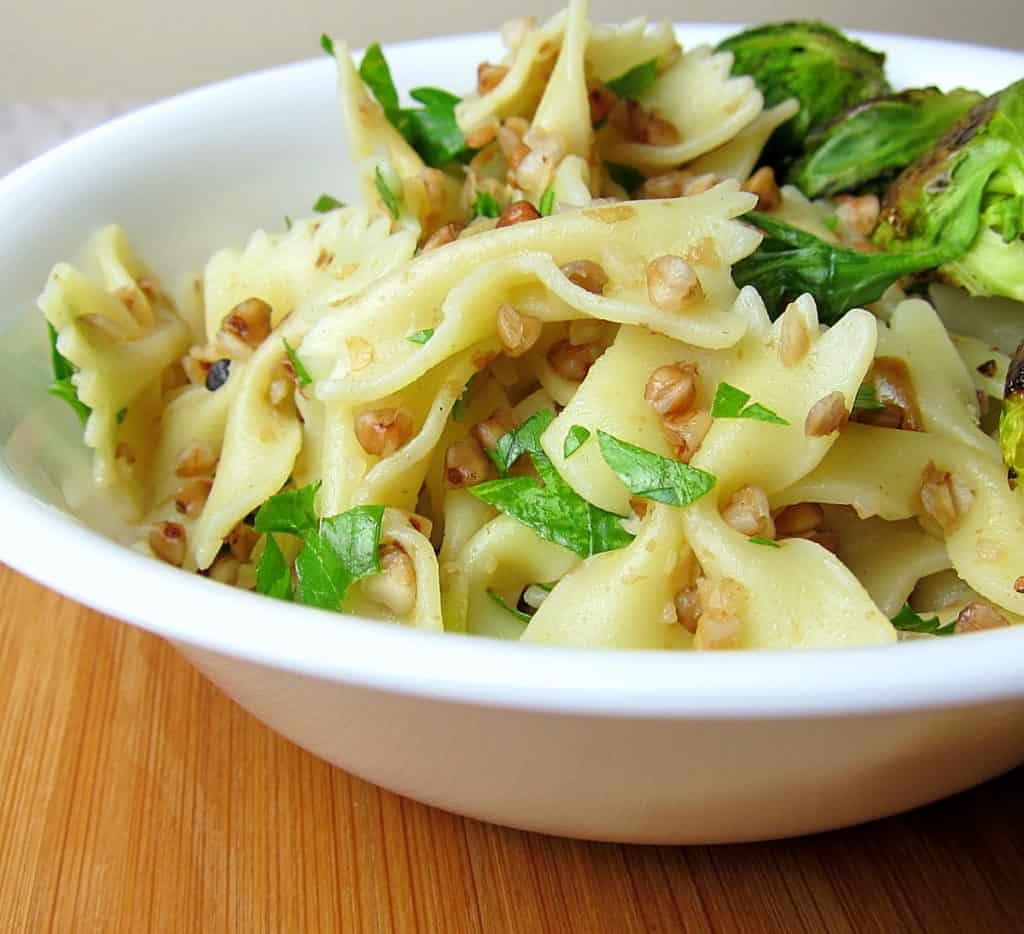 I can already think of several things I could do next time if I wanted to add some more variety to this varnishki recipe - sauté some mushrooms, or do a fried rice kind of thing where I add some eggs, soy sauce, and frozen peas while stir frying the buckwheat.

Did you enjoy this recipe? Let me know with a comment and a star rating below, and don't forget to save it for later on Pinterest: 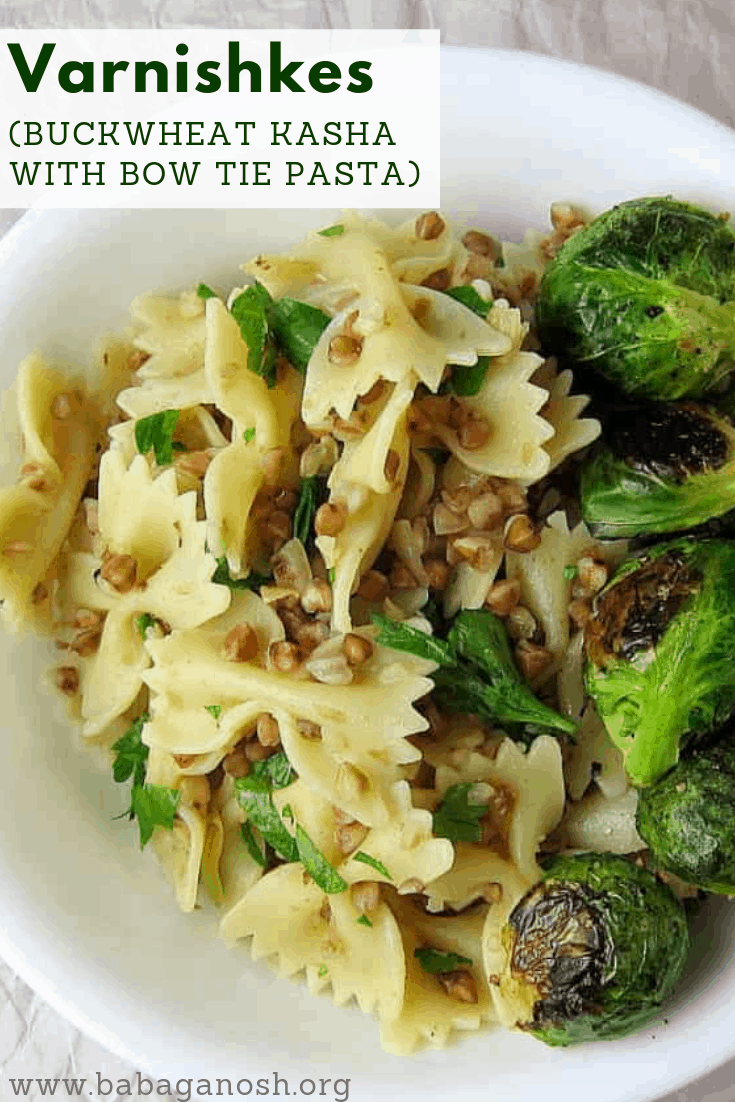 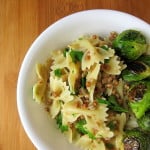 A hearty filling dish of buckwheat kasha with bow tie pasta, this recipe is a traditional Eastern European / Jewish food and is surprisingly delicious for such a simple combination of ingredients. Serve it on its own as a side dish.

Have you ever cooked with buckwheat? Let me know below!

First of all, EXCELLENT dish. We didn't know about Varnishki, it's a very interesting combination! We have wheat groats here in Greece, but buckwheat groats is impossible to find. Did you ever try Varnishki with common groats? Sorry if this sounds stupid, we aren't familiar with the Russian cuisine (yet) :) Thank you for the wonderful post, Panos and Mirella

When you say wheat groats, do you mean bulgur or something similar to that? I think buckwheat might work better in this recipe because buckwheat has a specific earthy taste, otherwise the pasta and the wheat might be too similar tasting and might not have enough contrast. But if you do try making it with wheat groats, please let me know hot it turns out!

I'll be honest, I'd make it just so I could say the name. The fact that varnishki bow tie pasta looks amazing makes it even better!

How did you remember this dish? I actually forgot about it.

That's such a pretty dish. I wouldn't have thought of the bowtie pasta and buckwheat but now I can't wait to try it.