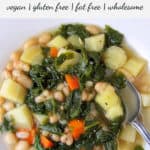 A simple easy recipe for White Bean Kale Soup with Root Vegetables. This hearty, healthy soup is ready in 30 minutes with just a few wholesome ingredients. 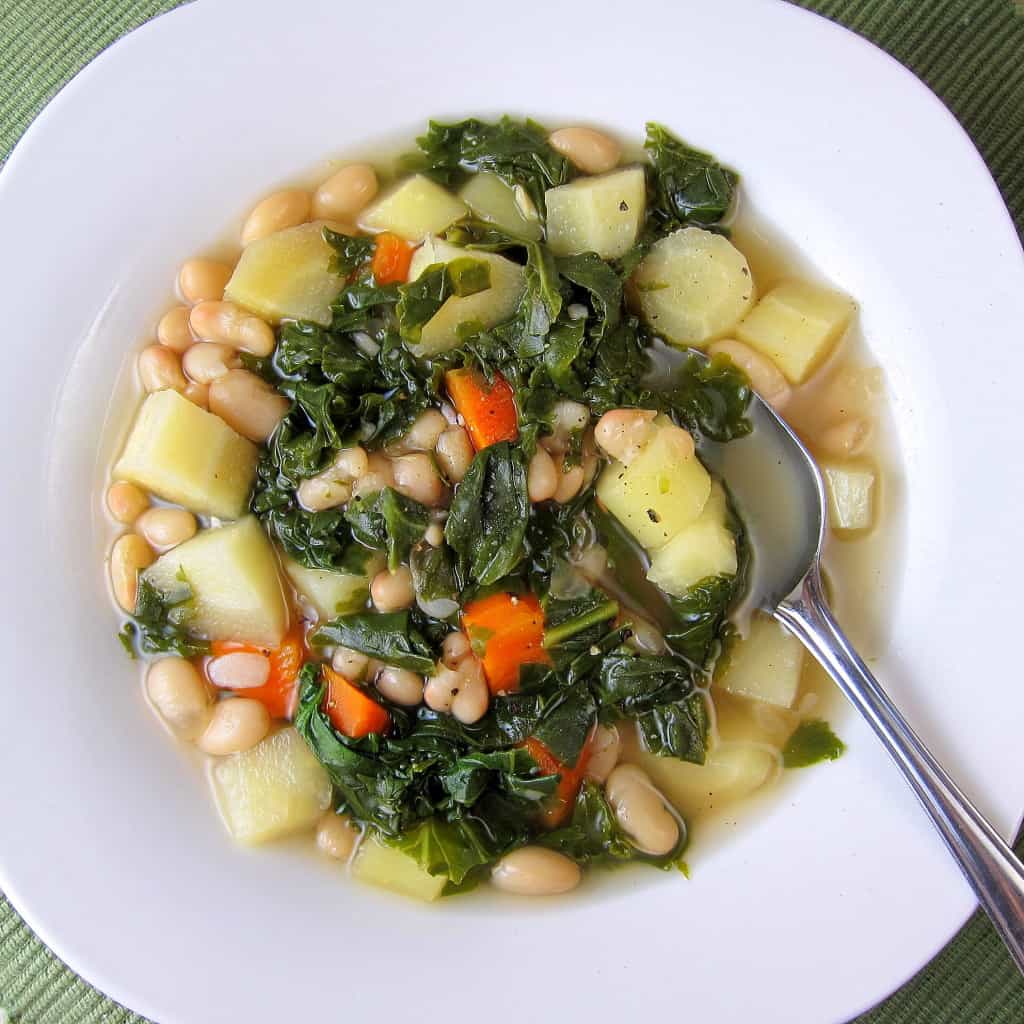 The weather is warming up in NJ and it is absolutely beautiful outside. Soon enough it will be too hot to eat soup, which is a shame because so many good soup ingredients are just starting to become in season now.

Last week we got parsnips and kale in our CSA box (community supported agriculture, if you want to read more about it) from Alstede Farms, and I just had to take the opportunity to make some soup before it got too hot to eat it.

This White Bean Kale Soup with Root Vegetables is just so  delicious, simple, hearty, healthy, and wholesome. It has just a few ingredients and it is super easy to make. And it just so happened that Aldo was starting to get sick, so it was actually good timing to make soup!

On another note about springtime, last Friday I was planting my herbs outside (I have parsley, cilantro, dill, thyme, and chives so far), and all of a sudden I saw something small moving around out of the corner of my eye. I looked closely and it was a little tiny baby bird that fell out of its nest!!  I freaked out a little and called Aldo, and we tried to figure out what to do with it.

At first we wanted to see if its bird mom would come take care of it, so we carefully placed it in a little container in a nearby shrub and watched from inside our apartment. But after an hour or so we saw that mama bird wasn't coming around, and we started reading more about baby birds on the internet.

It turns out they need to be fed every half hour!! And since mama bird wasn't coming to take care of it, we realized we would have to feed this tiny thing.

We looked up what to feed baby birds, and made a paste of soaked dry cat food and hard boiled egg (I know, it feels so wrong to feed eggs to a bird, but that's what the internet said to do because it needs a high protein diet).

We tried to feed this bird by making little balls of paste and putting them on a toothpick, but he wasn't opening his mouth. Then we did more reading, and realized that baby birds need to be kept warm, so we placed his container on a heating pad. And all of a sudden he opened his mouth and was asking for food!! 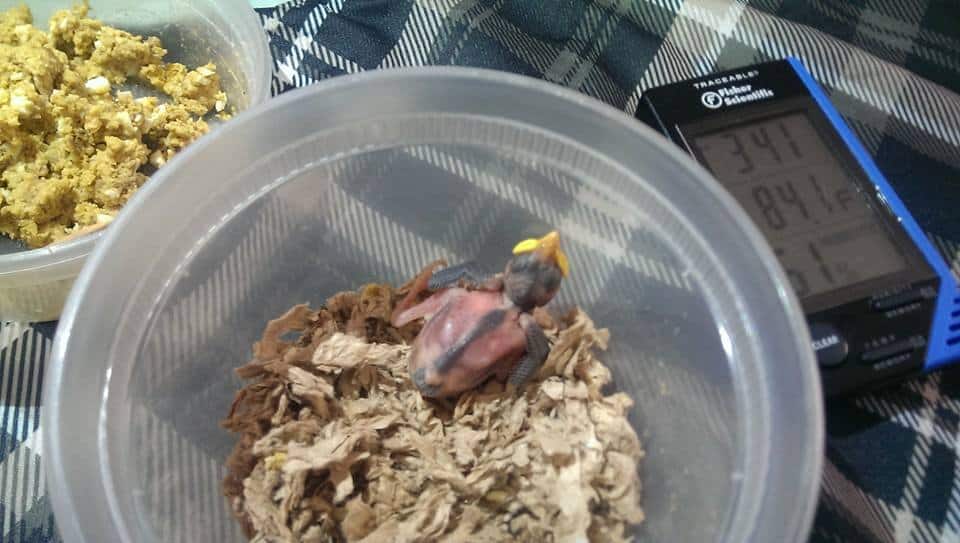 We took care of this bird all weekend because by the time we found him all the wildlife rehab places and animal shelters around us were closed for the weekend.

When we found him on Friday afternoon, he didn't even have defined slits where his eyes would open, but by Sunday night he opened his eyes for the first time! And Monday morning his eyes were totally open and he was looking around and looking up at me. I bet he thought I was his mama.

As the time went by, he got much better about eating and asked for food regularly and knew how to eat off a toothpick pretty well.

It was such a special experience taking care of this baby bird for a whole weekend. But luckily, the Raptor Trust took him in on Monday morning. They said they had a bunch of baby birds that were turned in, so our little guy would have lots of friends!

So that's our bird story.

And now back to this White Bean Kale Soup with Root Vegetables... 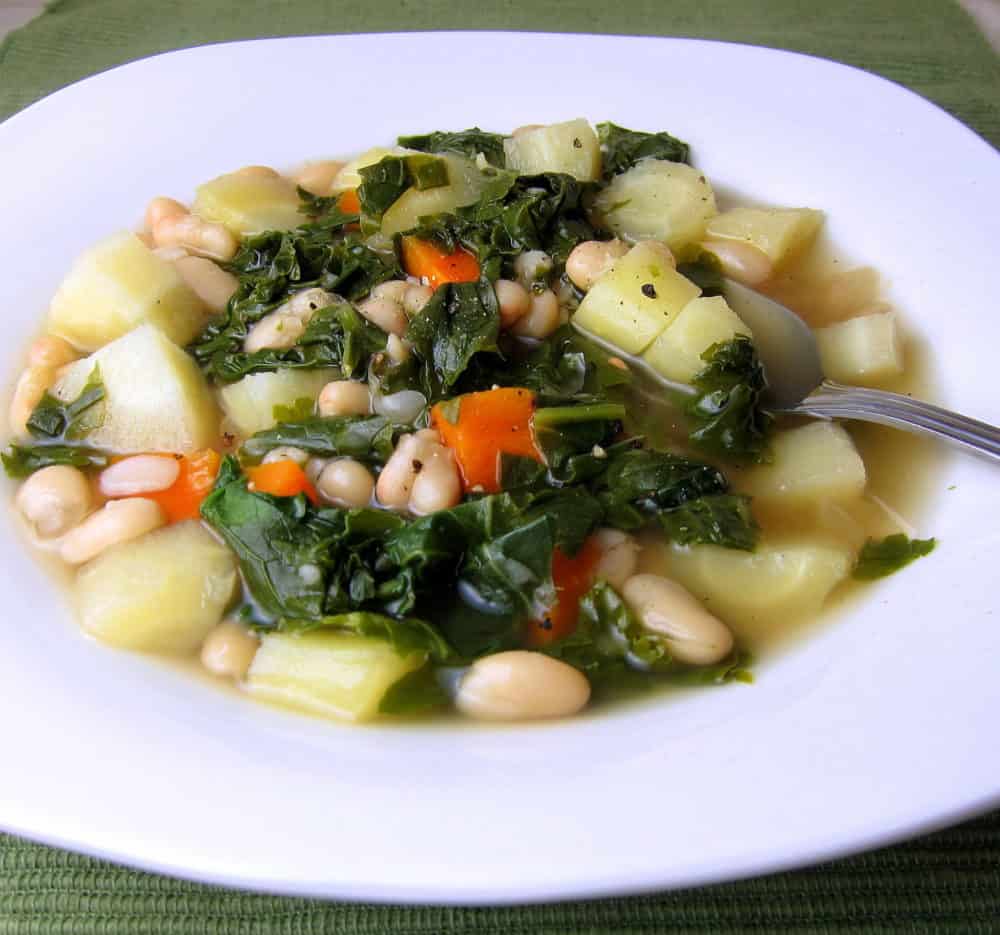 What makes this White Bean Kale Soup the Healthiest Soup:

This soup is packed with healthy, nutritious ingredients. Carrots, parsnips, kale, and hearty beans. All of this is cooked in a delicious vegetable broth to give the soup even more flavor.

It doesn't feel like you're eating a super healthy vegetable soup because it is loaded with ingredients with different textures and flavors.

This soup is the perfect healthy comfort food to me. It is great to eat in cold weather, or if you're getting a cold. If you want to spice things up a bit, you can add a few shakes of red pepper flakes to the soup.

I love cooking with kale because it cooks down so much. So in just a few spoonfuls of this soup you are actually eating a decent amount of kale. It's a great way to amp up your vegetable intake without having to eat massive salads.

This soup also contains absolutely no added fats. It's just not necessary when you've got such an abundance of flavorful ingredients. So this soup is very low in calories even though it feels filling.

This hearty vegetable soup is ready in under a half hour. If you are short on time you can even buy all the ingredients already chopped up, and this will save you a few minutes of prep time.

Shop for this soup recipe:

This recipe makes 4 servings, so you won't need a ginormous soup pot for this. A 4-quart pot such as this one will be large enough to hold all the soup ingredients.

I really hope you make this soup. I promise you that you'll love it!

Here are some more soup recipes you might love: 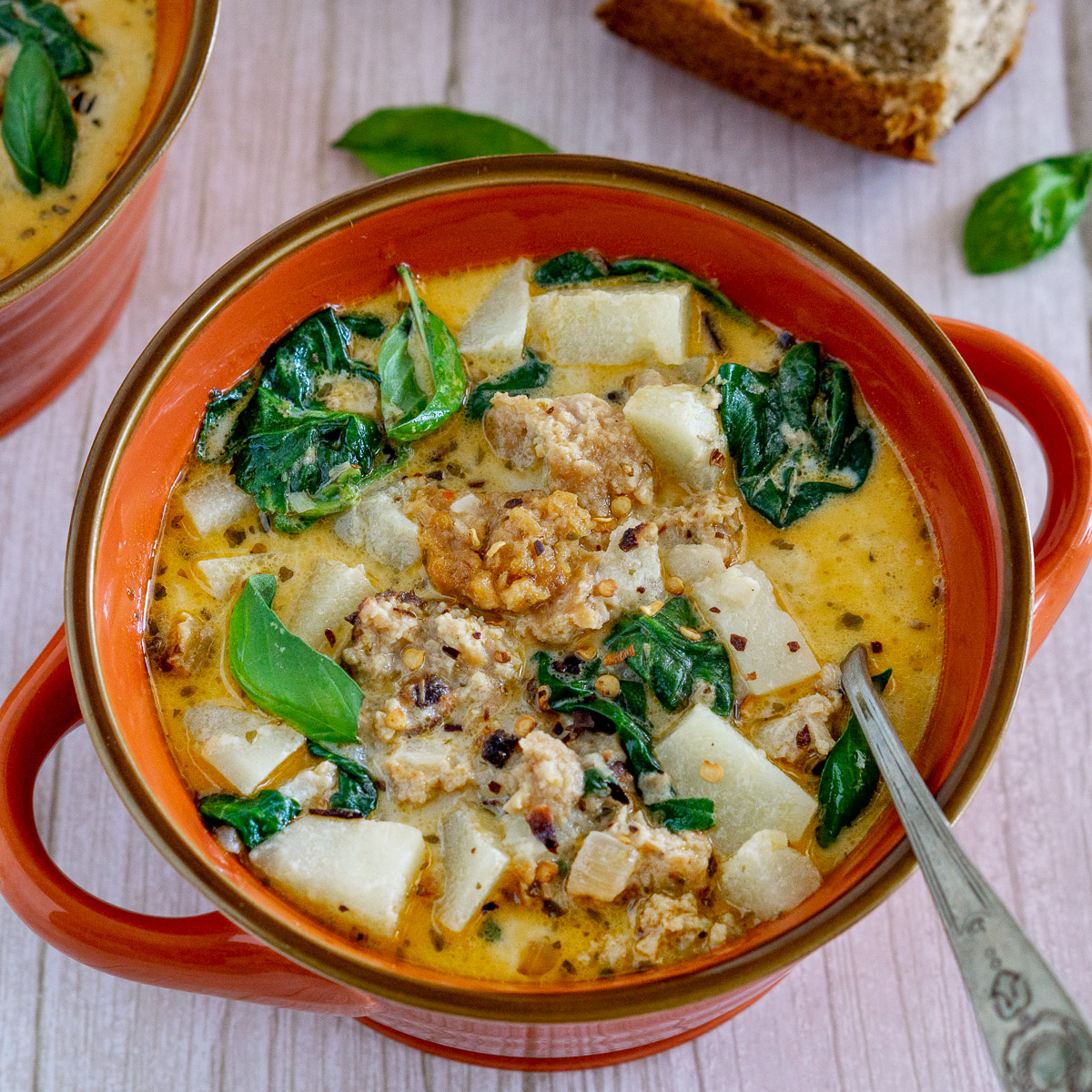 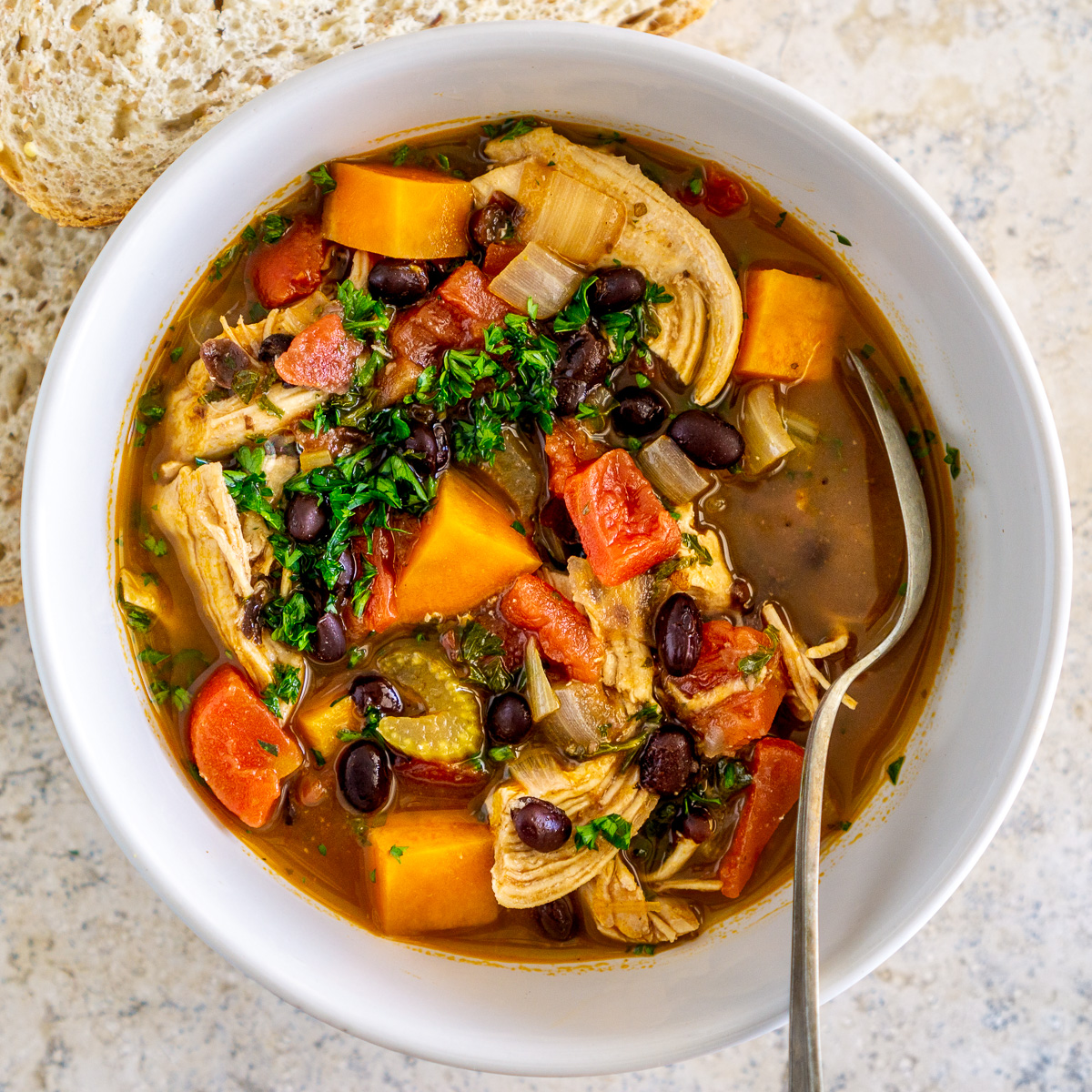 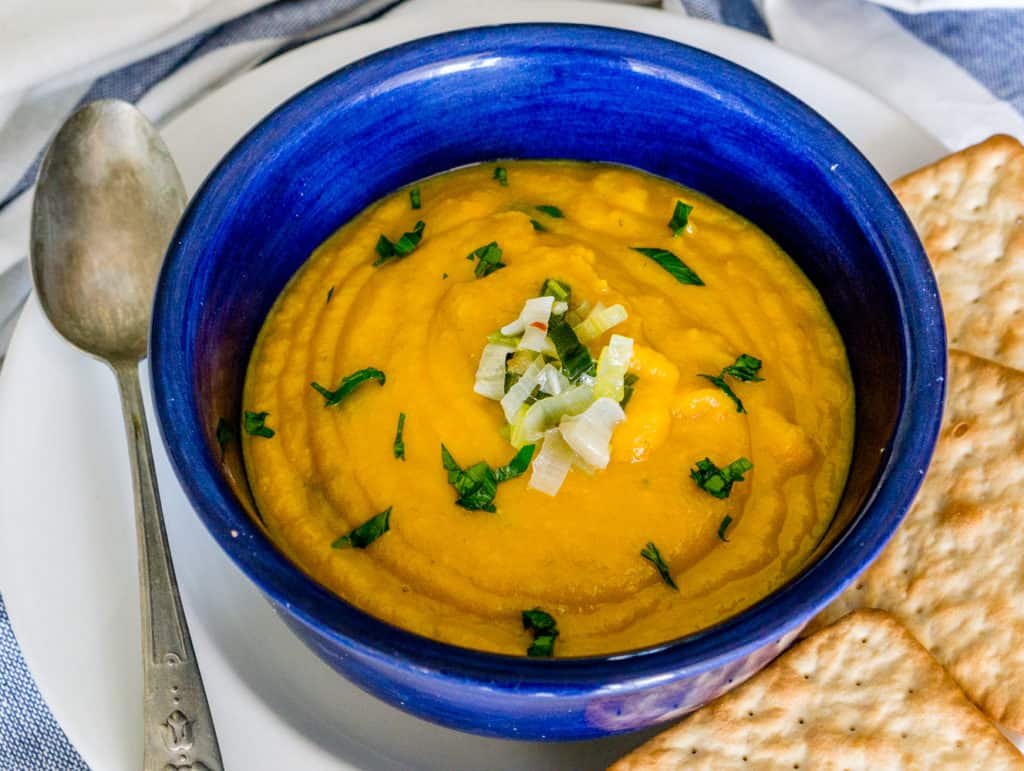 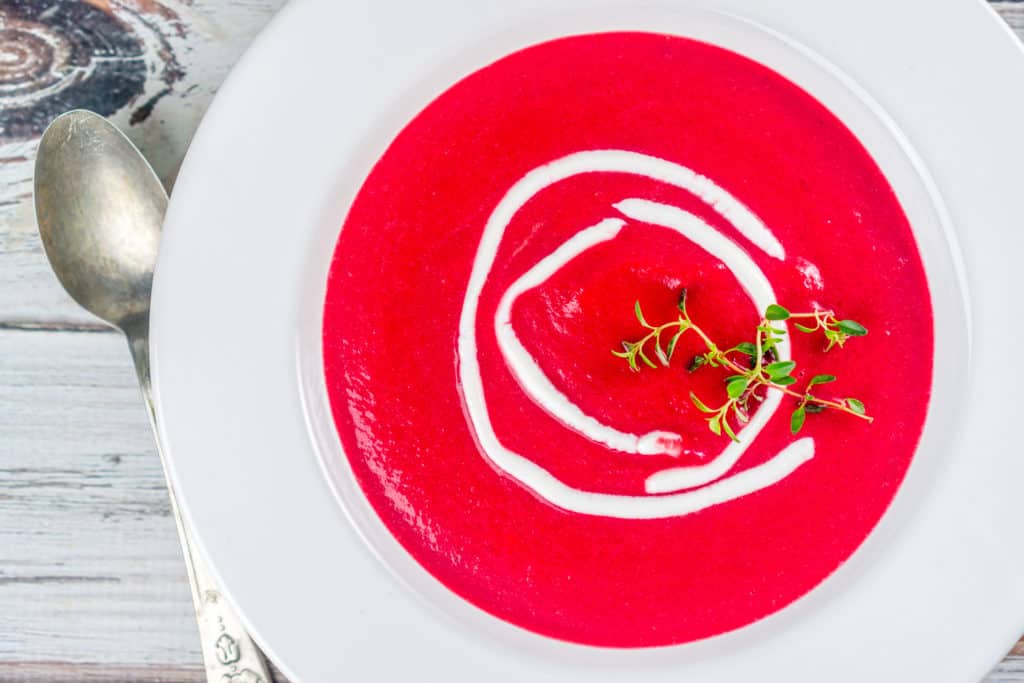 Lemongrass, Ginger, Mushroom Soup with Soba Noodles and Baby Bok Choy. This one is PACKED with healthy belly-warming ingredients. 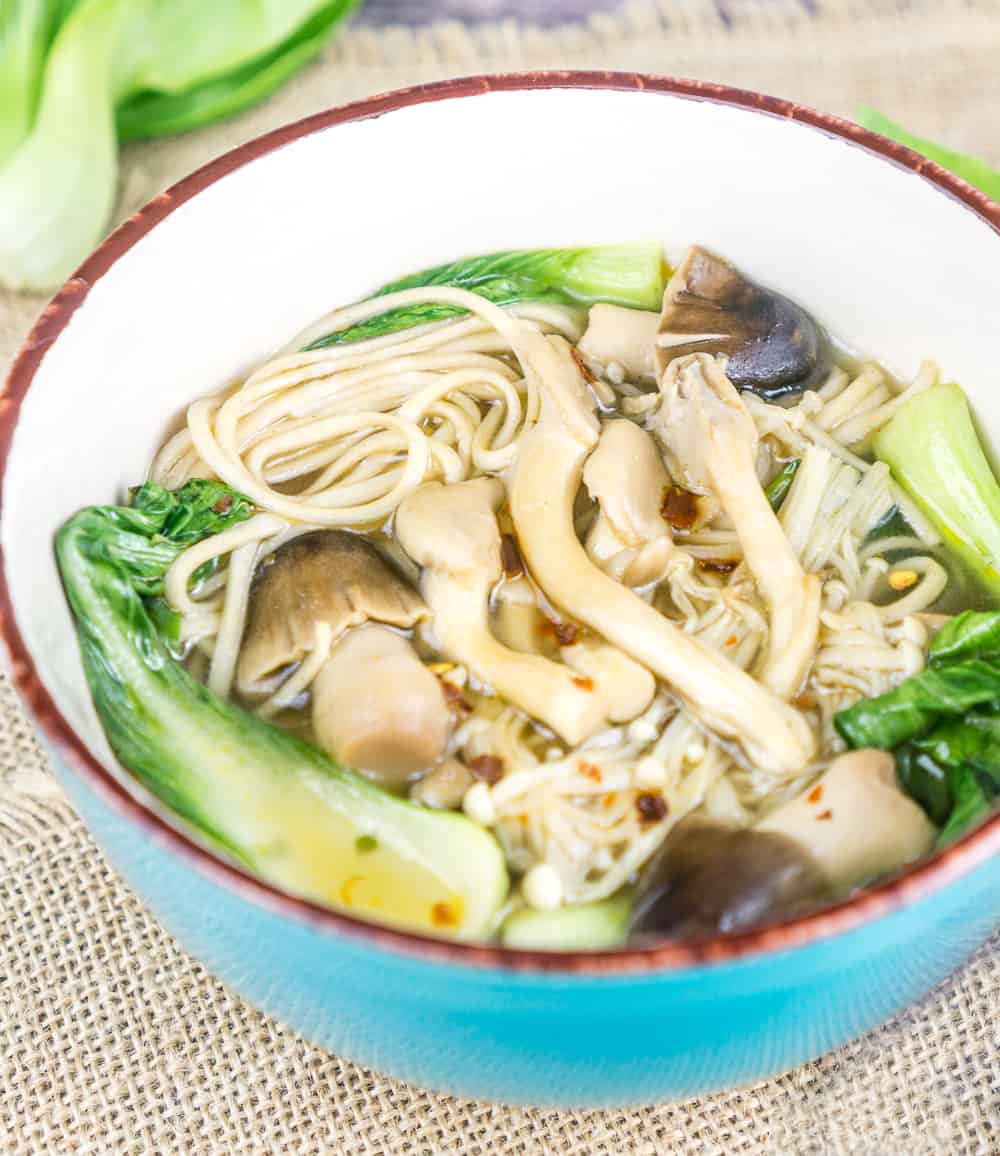 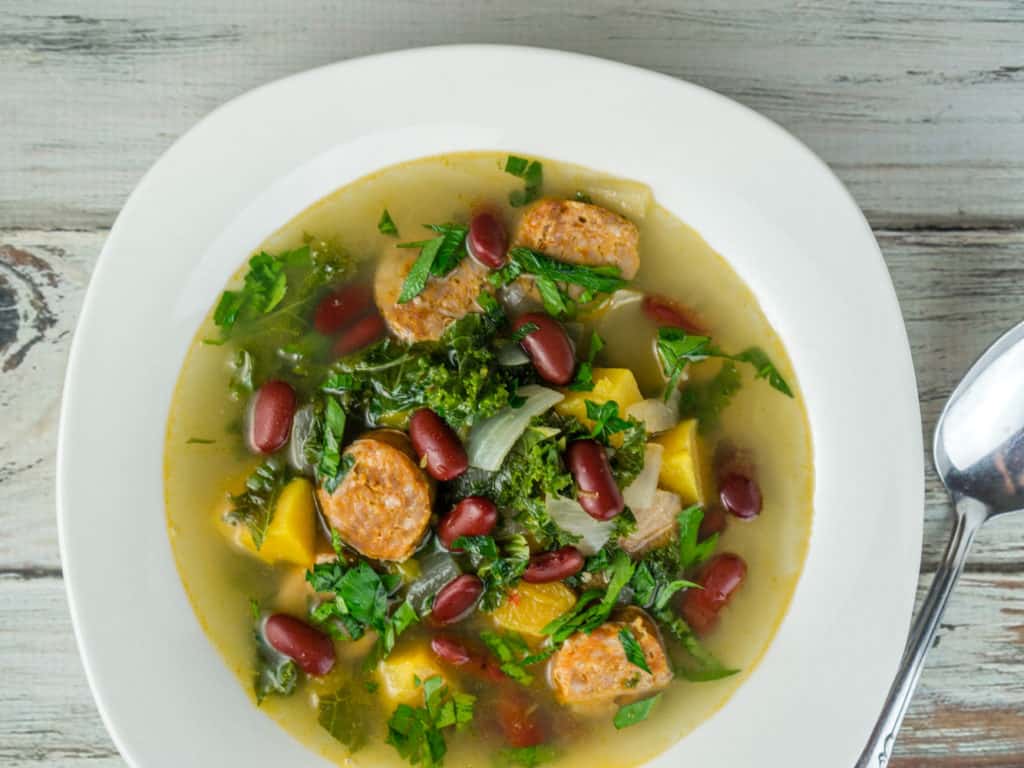 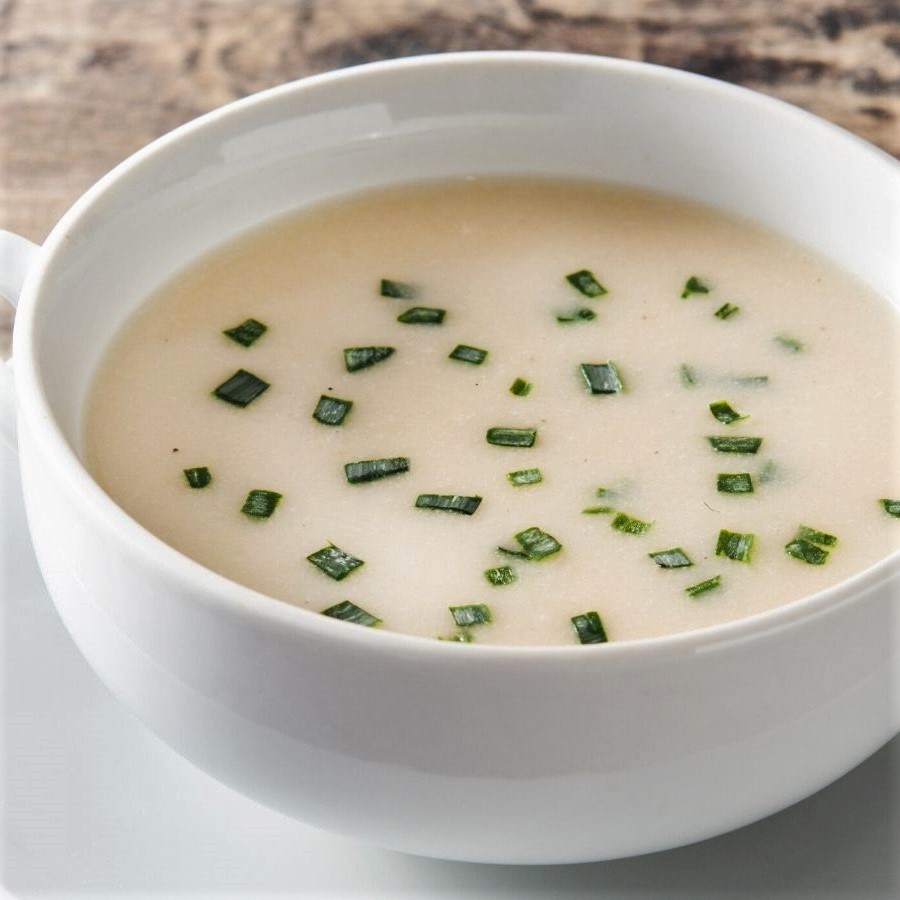 If you enjoyed this recipe, don't forget to leave a rating below, and save the recipe on Pinterest for later: 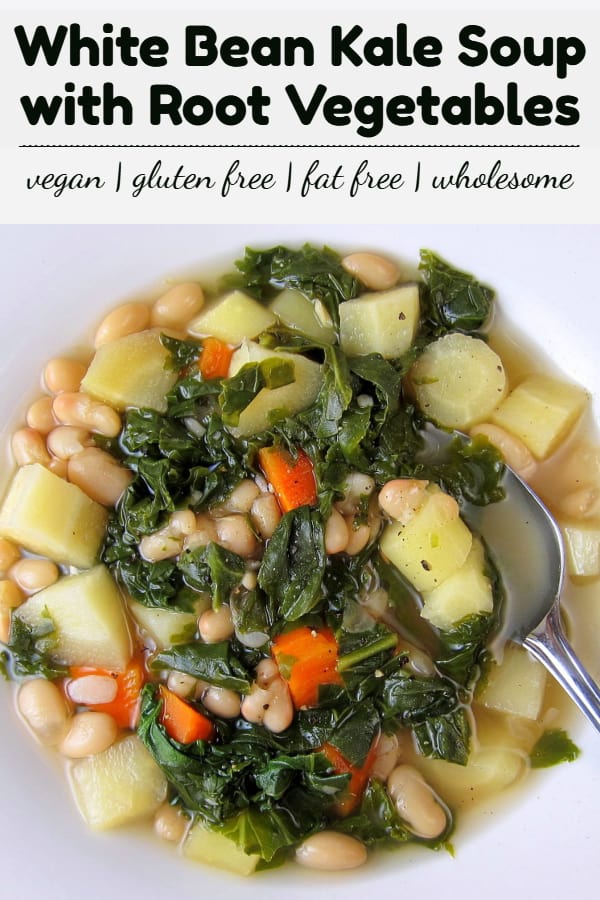 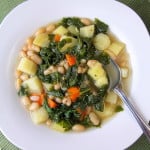 Shop for this soup recipe: 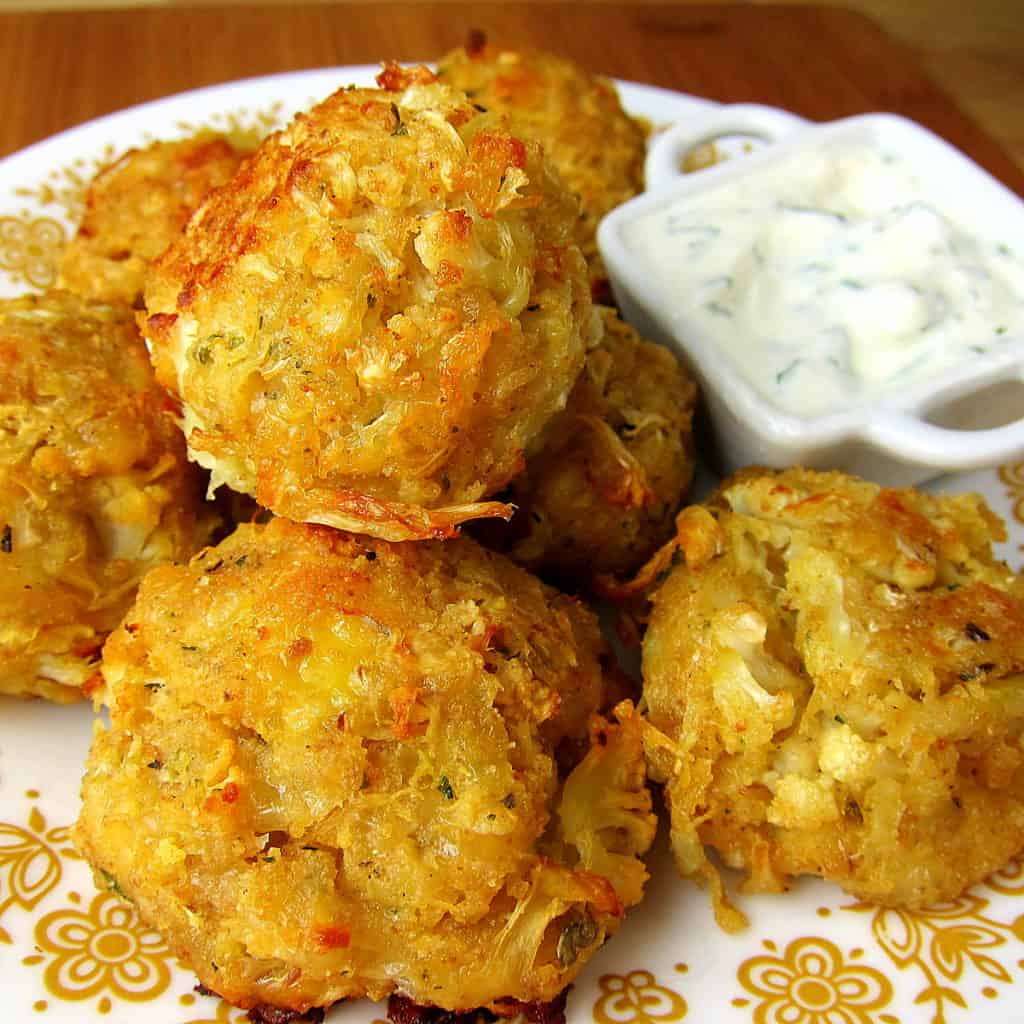 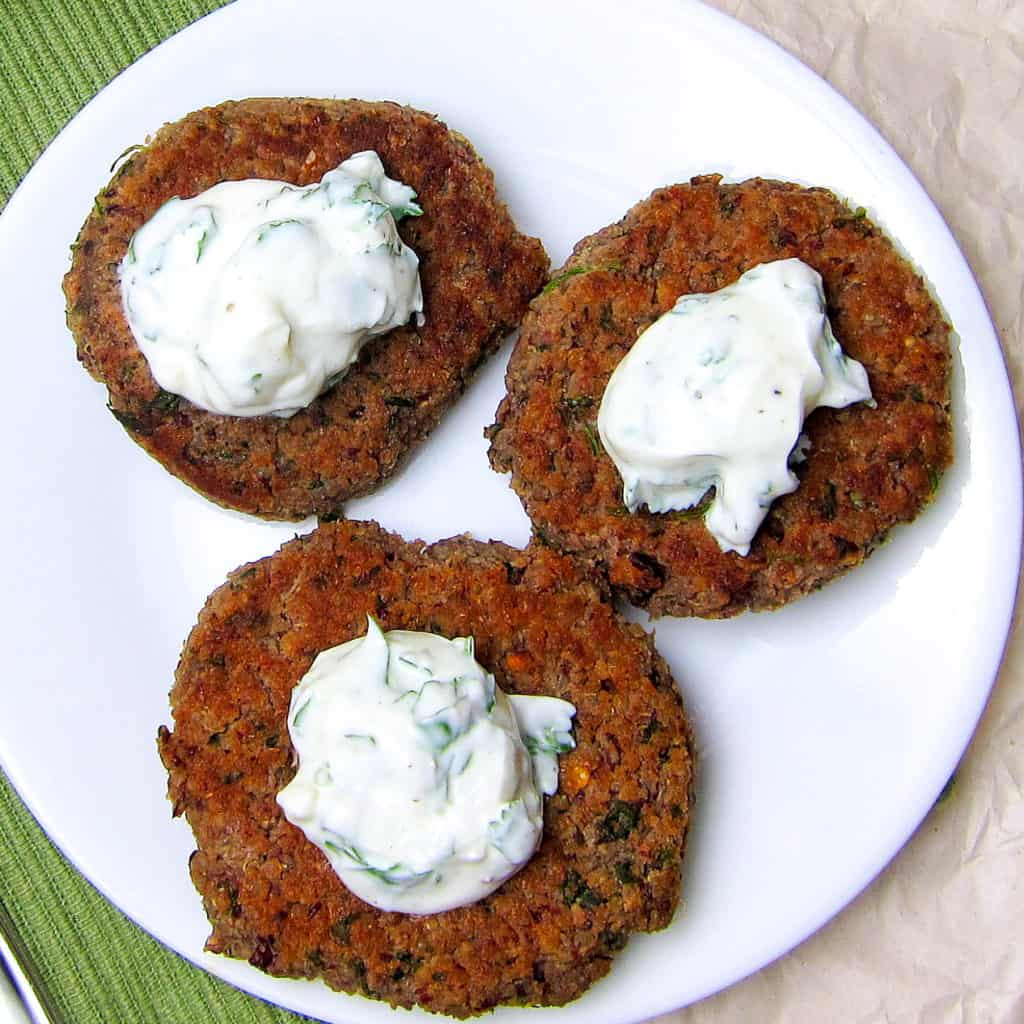 That baby is so tiny!! Aren't you nice to save it!

You could save me by giving me a bowl of this gorgeous soup. :)